by HFPA November 22, 2013
Share on FacebookShare on TwitterShare on PinterestCopy URL 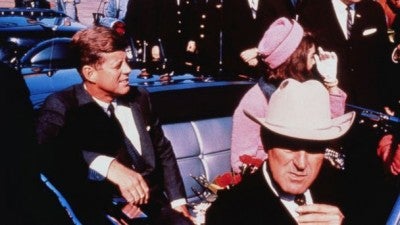 John Goodman I remember getting kicked out of class and was sent to the Deans office. Right then, when I got to the office, the news had come from Dallas that the President had been shot. I was ordered to report that news to the classroom. Then we got a television set and watched the day unfolding. I remember people crying. I was too young to appreciate how grave the situation was (I was eight or nine years old), but I remember feeling this sense of loss.

Jessica Lange I was in Junior High School up in Northern Minnesota and I remember the confusion. After the news the school was closed, all students sent home. I remember, the black and white imagery on television that went on and on. Those iconic moving images always stay in my mind. Though I was too young to really understanding, I was thirteen, I knew even then, that there was something that happened in a way that this country would really never recover from.

Kathy Bates I remember being sent home from school (I was fifteen). I remember the shock. I remember watching television all of that weekend. The funeral preparations, the people paying their respect at the state and (two days later) seeing Oswald get shot, it was on television. I grew up that day and it certainly was the end of my childhood.

Michael Douglas I was a freshman at the University of California in Santa Barbara. We were walking in-between classes. The first thing I noticed, was this silence. Thousands of students walking in silence. Even today as back then, still brings chills. Then I saw someone listening on the radio. That´s when I heard this incredible news. We, as college students could identify with John F. Kennedy, because he did not look like an old senior guy, he represented us in his youth and he had a stunning way of speaking.

Morgan Freeman I was working in the garment district in New York. I broke for lunch and when I got back, it was all over the news. Of course everybody turned on the radios. Nobody worked. I think, we all just sort of ambled out of offices and into the streets. I remember walking home and people in the streets all seemed dazed. It was an unbelievable day, this is America and nobody shoots our President.

Robert De Niro I was on the subway in New York and I heard people starting to talk. I was maybe, 20, and it was the first experience of having something so devastating for our country. It was just an impossible thing to imagine in my short life.

Jacqueline Bisset I was having dinner with friends in Paris. The rumor passed that JFK had been shot. We all were shocked, quiet and tried to find more information. I remember the quietness in the streets and people looking horrified.

Anthony Hopkins I was performing that night in London. It was a play by George Bernard Shaw. All actors shared the same dressing room. We were about to go on stage, when the stage manager suddenly said, President John F. Kennedy might have been shot. The stage manager tried to get a signal on a radio in a corner for further news. Then I had to go on stage. I could not make an announcement because I had lines to say. At the interval, of course everyone got to know the news. The play went on but half the audience had gone home. It was a huge shock. It was very bizarre.

Richard Sherman At that time, I was working at the Walt Disney Studio in Burbank. The day started out beautiful and nice. My brother Bob and I, we were working on a song for the musical “The happiest millionaire”. But all of a sudden, I heard one of the secretaries down the hall screaming. I poked my head out the door and looked what is going on. People were crying. “Kennedy was shot in Texas”. It was horrible, because we loved Kennedy. He was a great image, a wonderful guy. It was absolute horrifying. I started crying. My brother Bob started crying. We both walked across the street to Bill Walsh´s office, who was the writer of “Mary Poppins”. He had a Tv in his office and together we watched television. It was so unbelievable and I was so miserable. And that part that is weird. I felt so miserable and my feeling was, I have got to shut this all out of my brain right now or I`ll explode. So, I returned to my office. We were working on the punch lines for the opening song “I will always be Irish”. But we did not get them. While I was starring at the page that only said “Happiest”. Suddenly it all came out. “…I am proud of Irish blarney and Irish sentiment, and I bet one day we will get an Irish president.” These lyrics, I wrote the day JFK died. Then I started weeping like a baby.