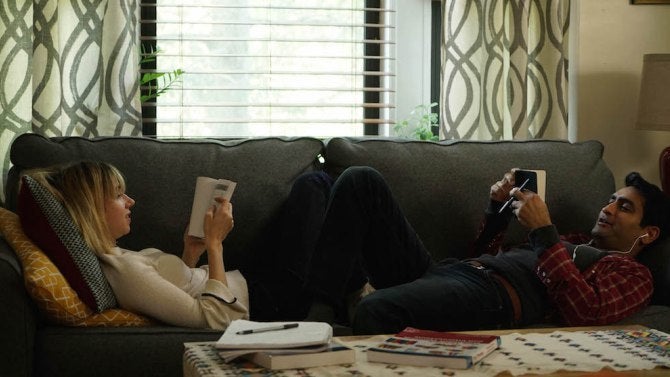 Scene from The Big Sick

For all its well-earned reputation as a showcase for edgy indie fare, Sundance has been known to screen some great comedies through the years. This year The Big Sick filled that bill and then some. Directed by Michael Showalter (Hello My Name is Dory) and produced by Judd Apatow, the film achieves that rare balance between grace, witty humor and delivers plenty of smart heartfelt laughs.

The story is that of the real-life romance between one – that of Kumail Najiani, who plays himself, and his now wife, writer Emily V Gordon (played with spot-on nerdy élan by Zoe Kazan). We find Kumail (perhaps best know to Silicon Valley fans as painfully awkward Pied Piper programmer Dinesh Chugtai) plying his budding trade as stand-up comedian in a dive-y Chicago club – and moonlighting as an Uber driver. The windy city has been fertile training ground for generations of comics and Kumail and his pals aspire to follow their footsteps. For the moment though they are paying their dues, trying out fledgling routines on distracted audiences. Kumail whose jokes mine the comedy surrounding the awkward acculturation of his Pakistani immigrant family, is also the object of his mother’s forceful matchmaking. Rather than submitting to the matchmaking tradition (an endless stream of eligible young women from good Pakistani families seems to magically appear at the Najiani’s) Kumail meets graduate student Emily after a show and ends up taking her home that same night.

The romance between the two is as immediate as it is sweet – and funny. A first awkward moment ensues for example when Emily calls for an Uber to get back home…and it’s Kumail’s phone that answers on the bedstand. It seems like a match made in heaven for the young lovers who share the same endearing self-deprecating humor and banter effortlessly through first dates in which Kumail tests Emily’s taste for cult horror moves which he loves (she, not so much) and both revel in reciprocal “dweebiness.” Kumail cannot however find the courage to let his tight knit family know about Emily, fearful as he is of breaking the stated expectation that he marry a nice Muslim girl from Pakistan. That cowardice ends up costing dearly when Emily inevitably discovers the deceit and breaks off the relationship.

Things take an unexpected turn when Emily contracts a serious infection and is placed in an induced coma. Kumail is summoned to her side where he meets her parents (Ray Romano and Holly Hunter, exquisite in supporting roles). The initially frosty relationship (Emily’s mother has no love lost for this ex potential son-in-law) turns into a journey of self-exploration for all involved, setting up the resolution in the final act. Gordon and Nanjiani preserve en effortless self-irony throughout the film, which embodies the best of current generation of TV comedy – at times recalling the scruffy situational comedic tone of show like Louie, but drawing vital strength from an essential honesty at its score.

All in all an achievement for director Michael Showalter and another hit for Apatow which signals the big-screen worthy arrival of Najiani as the latest of an emerging crop of South Asian comics which are taking U.S. comedy by storm.