by Meher Tatna March 31, 2017
Share on FacebookShare on TwitterShare on PinterestCopy URL 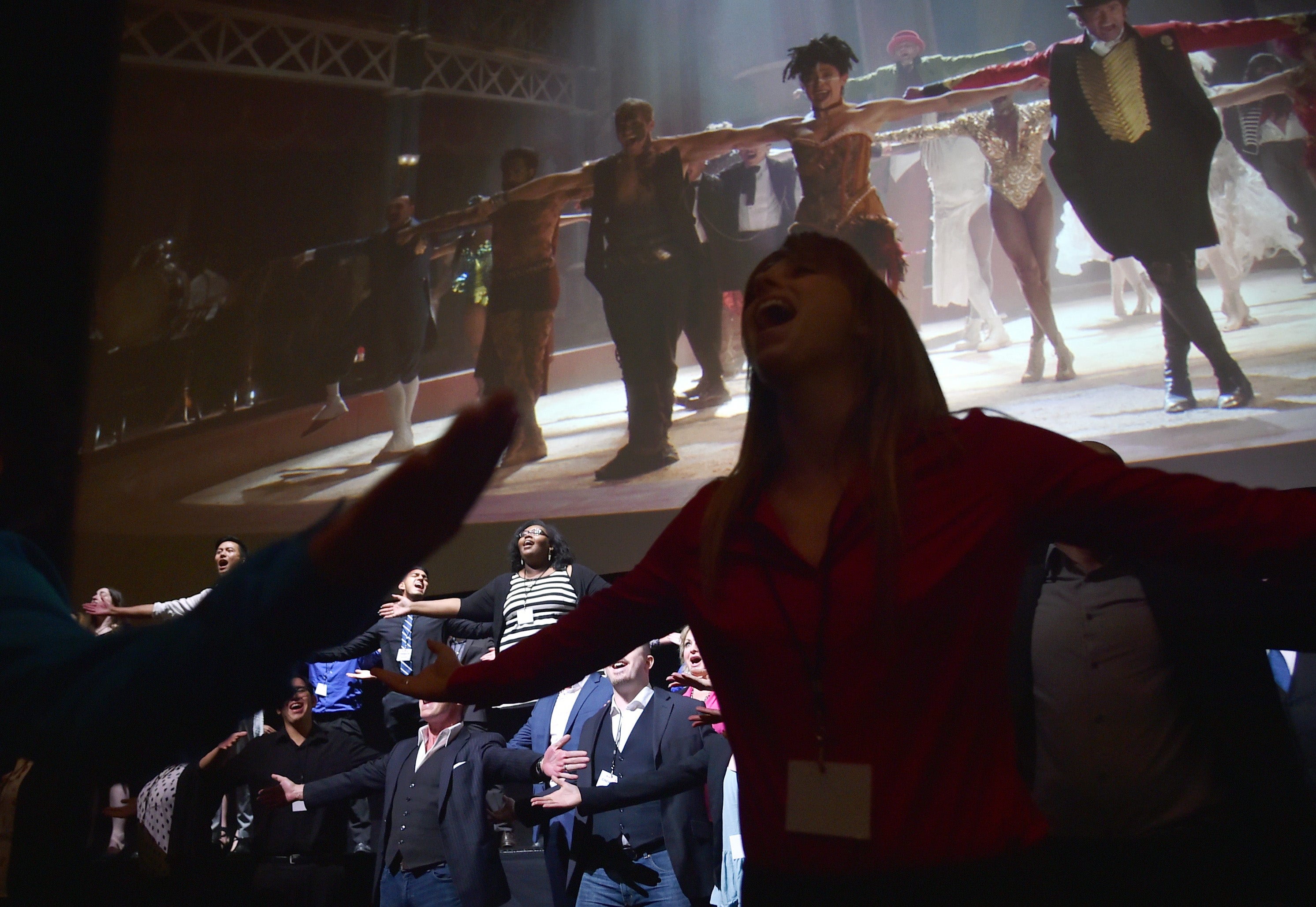 CinemaCon’s last day and the delegates were woken right up at the start of the Fox presentation by iLuminate dancers dressed in black and white top hat and tails. Their costumes were covered with LED and electroluminescent wires that lit up in synchrony as they danced in the dark to the tune of ‘There’s No Business Like Show Business.’  Fox’s “Fanfare Through the Decades” followed, and president of domestic distribution Chris Aronson took the podium to tout Fox’s $4 billion worldwide take last year, mostly thanks to X-Men Apocalypse, Trolls and Deadpool. Logan is expected to do more than $600 million this year and Hidden Figures is still in theaters. The collaboration with Dreamworks will bring The Boss Baby next week and Captain Underpants (very cute trailer) later.

Amy Schumer and Goldie Hawn were introduced by CEO Stacy Snider and they did a very funny bit to introduce footage of their movie Snatched. Apparently, Hawn jettisoned the whole plan where she was supposed to pretend she never heard of Schumer, instead praising her as a daughter. Schumer said Hawn was so friendly that “if anyone invites her to do peyote in the desert” she would go.

The fourth installment of Wimpy Kid based on the bestselling kids’ books, The Long Haul, is coming soon, and delegates saw a bit of it with a new cast as the original kids are now in college. We were also shown a sample of The Mountain Between Us, the new Kate Winslet-Idris Elba movie based on yet another bestseller about two survivors of a plane crash in the Utah mountains. Anything with Idris Elba has to be good. Give him the Bond role already, for god’s sake.

The new War for the Planet of the Apes has Andy Serkis returning as Caesar and Woody Harrelson as the villain. We saw extended footage of it.

The trailer of Kingsman: The Golden Circle brought the loudest applause, probably because it covers every demographic with its cast – Taron Egerton, Channing Tatum, Halle Berry, Jeff Bridges, Colin Firth and Julianne Moore.

And then there was a glimpse of Kenneth Branagh’s Murder on the Orient Express. Speaking to the packed Colosseum by video from Malta Branagh called the movie a ‘why-done it.’ Talk to me if you want to know what I thought.

And then there was Alien Covenant with Ridley Scott introducing, again remotely. It looks SPECTACULAR.

Fox Animation will bring us Ferdinand voiced by John Cena, who was heralded on stage with smoke and flares. This wrestler-rapper-reality show host turned actor has charisma to burn. He also shows up in an Amazon movie, but more on that later.

The highlight of the presentation was footage from The Greatest Showman, with an intro by Hugh Jackman who was rapturously received and a great favorite of the theatre owners. He thanked his mom who was in the audience because “if I don’t do that, she’ll start heckling.” He told everyone about his first ShoWest experience when he was just starting out, trying to introduce himself to Clint Eastwood who only had this to say to him – “You’re holding up the line, kid.”  Can’t wait for this one. 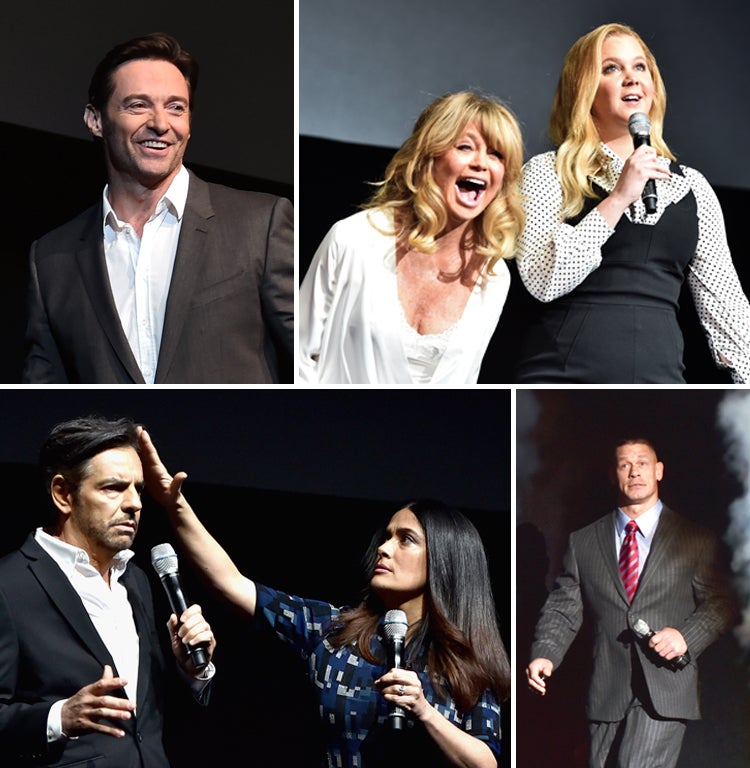 Amazon Studios did the day’s second presentation. The noteworthy part was worldwide head of motion pictures Jason Ropell assuring theatre owners that the streaming service totally respects the theatrical experience and supports the window between exhibition and streaming. 2016 was their first year in the business and they released 15 movies, two of which (Manchester by the Sea and The Salesman) won Oscars.

Another 15 are planned for 2017, and we saw footage or trailers of the following: The Lost City of Z (introduced by Charlie Hunnam who said shooting was so intense that he lost 35 pounds and switched off his phone and email for four months); Doug Liman’s The Wall with the aforementioned John Cena again appearing with smoke and flares (“I’m pre-thanking you for your support”); Landline and Crown Heights from Sundance; the comedy The Only Living Boy in New York; Ben Stiller’s dramatic turn in Brad’s Status; and Last Flag Flying with Bryan Cranston, Steve Carell and Lawrence Fishburne about Vietnam vets on a road trip. Wonderwheel, the new Woody Allen about the Coney Island ferris wheel, starring Kate Winslet and Justin Timberlake, had no sneak peek obviously, just a mention.

A bunch of other titles that were fully financed by Amazon were mentioned. Noteworthy among them are Terry Gilliam’s long-planned Don Quixote with Adam Driver; Mike Leigh’s new Peterloo; and Todd Haymes’ Wonderstruck.

Amazon Studios’ highlight was Kumail Nanjiani and wife Emily Gordon’s appearance to promote their movie, the Sundance hit The Big Sick, based on their own story. “It’s the best movie you’ll see about a Pakistani standup comedian and a girl in a coma,” said Nanjiani. He proceeded to warn everyone that there were a lot of ‘fucks’ in the movie “because it’s a Judd Apatow production and he has a quota to meet.”

Then movie snacks were shot out of guns to the audience with some help from the actors present.

The last presentation of the day was from Lionsgate, which talked about its 26 Oscar nominations and eight wins, and its 2016 box office which was the same as 2015’s but without the Hunger Games franchise.

How to be a Latin Lover was introduced by Salma Hayek and ‘Eugene’ Derbez, Hayek complaining about the pronunciation of his real name Eugenio as “two vowels in the beginning and end and a puking sound in the middle.” He countered by describing her character in the movie as “my very annoying sister which is not a stretch for her.”

The trailer for the Tupac Shakur biopic All Eyez on Me, which will release in June, drew sustained applause. Footage from American Assassin with Dylan O’Brien and Michael Keaton looked good too. The movie that has tested the highest in Lionsgate’s history is Wonder with Julia Roberts and Owen Wilson playing the parents of a child with challenges. This one did look as good as advertised.

Then the audience saw The Hitman’s Bodyguard which teams Ryan Reynolds (the bodyguard) and Samuel L. Jackson (the hitman), who, after opposing each other for years, find themselves on the same side, as they travel from England to The Hague where Jackson’s character has to testify in a trial for an Eastern European dictator played by Gary Oldman. Salma Hayek plays Jackson’s wife. Switch off your mind and go for the ride.

The evening - and CinemaCon 2017- ended with the Big Screen Achievement Awards, given to stars that will feature prominently in movies for the upcoming year.

Cinema Icon Award — Goldie Hawn Presented to her by Amy Schumer – “Don’t know why Billy Bush isn’t here.” Goldie – “You can’t go it alone. If you’re fearless, trusting, have tenacity and work in unison with others, you too can be an icon.”

Producer of the Year — Chris Meledandri Referring to the movie that made him successful – “Exhibition did not wait for Ice Age to be anointed, and became an engine for the movie’s success.”

Rising Star of the Year — Isabela Moner “This is dope. Thank you to Paramount for seating me on a private jet next to Zac Efron two days ago.”

Director of the Year — Jordan Peele “I dedicate this award to all those who work in movie theaters, including the concession workers and ushers.”

International Achievement in Comedy — Eugenio Derbez “I want to give you a few seconds to make sure this is for me and not for Moonlight.”

Distinguished Decade of Achievement in Film — Naomi Watts “I was here 15 years ago to get the Star of Tomorrow award.”

Action Star of the Year — John Cena “What a dream come true this whole day has been.”

Male Star of Tomorrow — Ansel Elgort “I had my first kiss with my girlfriend in a movie theater. It was Hangover 2 and it was really romantic.”

Female Star of Tomorrow — Sofia Boutella “I am an immigrant. I was born in Algeria. My heart is with all the others that hope for a better life.”

Comedy Star of the Year — Kumail Nanjiani “Last year this award went to Kevin Hart which means I’m a bigger star unless you count the box office.”

CinemaCon Vanguard Award — Salma Hayek “Thank you for selling nachos in the theaters. Not very Mexican but still representing us somehow.”

Male Star of the Year — Charlie Hunnam “It’s only March. It may be a little premature for this award. I’m pretty sure Ryan Gosling has a movie coming out.”

Female Star of the Year — Jessica Chastain (Quoting Chunk from Goonies referring to movie theaters) “I’m not all alone in the dark. I like the dark. I love the dark.”

The after party featured a performance by two-time “Las Vegas Headliner of the Year”, Frankie Moreno. 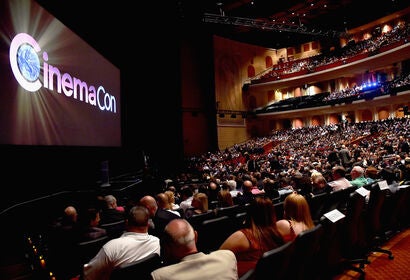 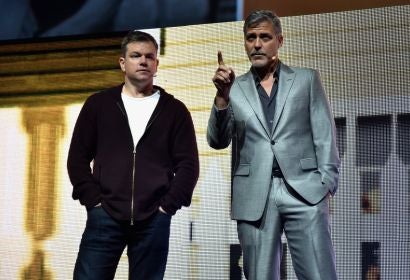 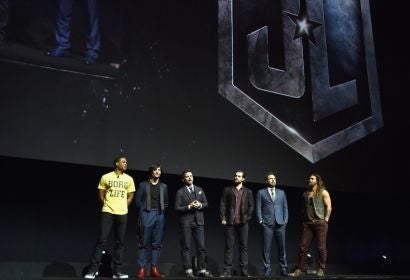 Industry
CinemaCon Day 3: The Boys (and Girls) of Summer (and Fall)
Read More

Music
On Music: For Catherine Zeta-Jones, It's a Family Affair
March 30, 2017
Industry
Thelma Schoonmaker: "Editing Scorsese is like working with Picasso"
March 31, 2017