by HFPA January 10, 2012
Share on FacebookShare on TwitterShare on PinterestCopy URL 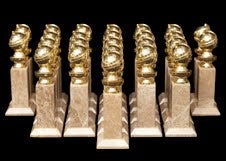 Golden Globes by the numbers: How long is the red carpet? Who's won the most awards?
Picture: Frazer Harrison/Getty Images

The Hollywood Foreign Press Association will host its 69th Annual Golden Globe Awards this Jan. 15. Have you ever wondered how many people will be on hand that day? How big a red carpet would have to be to hold all that high-watt talent? How much all that bubbly costs? Who scored the most Globes but never bagged an Oscar? Entertainment Weekly.com has got answers! Keep reading…

250 million Estimated number of global viewers tuning in for this year’s ceremony
$3 million Value of Jennifer Lopez’s Harry Winston earrings in 2011
$850,000 Cost of the 124-karat Chopard bracelet tucked away in Christina Hendricks’ cleavage when she stashed it there after nearly losing it on the red carpet last year
80,900 Google hits for Natalie Portman’s highly meme-able chortle during her 2011 Best Actress acceptance speech
30,000 Square feet of red carpet
9,000 Glasses of Moët & Chandon Grand Vintage Brut 2002 served throughout the night (at $84.95 a bottle, that’s about $84,950 of champagne)
$7,000 Reported cost of Black Swan star Mila Kunis’ HD Diamond and Ruby Peel pre-red carpet facial
5,500 Number of people on site the day of the ceremony, including attendees, viewing parties, and press
3,000 Strands of Swarovski crystal decorating the set of the 68th ceremony
1,500 Retweets of Chris Colfer’s acceptance speech for 2011 Best Actor in Glee
$550 Value of last year’s gift bags
100 days Length of the 2008 Writer’s Strike that interrupted the Globes telecast (the only time the show hasn’t been broadcast since 1958)156 minutes Length of The Song of Bernadette, the first Globes Best Picture winner
71 years Age gap between the Globes’ oldest and youngest winners — 80-year-old Jessica Tandy for Driving Miss Daisy in 1990 and nine-year-old Ricky Schroder in 1980 for The Champ
53 Years since celebrities began hosting the Golden Globes after Rat Pack-ers Frank Sinatra, Dean Martin, and Sammy Davis Jr. stormed the stage with whiskeys and cigarettes and took over the show
43 Number of times the event has been held at the Beverly Hilton Hotel since 1961
37 Jamie’s Foxx’s age when he became the first person ever to be nominated for three Globes in a single year (Helen Mirren was 61 when she, too, became a triple threat two years later)
27 Most nominations by any single actor (current nominee Meryl Streep, of course, who also holds the record for the most performance-based wins)
25 Total number of awards handed out (14 film, 11 television)
24 Number of nominees for Best Animated Feature since the category was added in 2006 (Pixar has taken the trophy all five years so far)
22 Age of Rainey Qualley, Miss Golden Globe and daughter of former winner Andie MacDowell
14 Years the show had no host between the 1995 telecast (hosted by John Larroquette and Janine Turner) and when Ricky Gervais took over in 2010
11 Globes (including honorary awards) won by Barbra Streisand — the most of any celebrity
10 Years since Judy Davis triumphed in Life With Judy Garland: Me And My Shadows (Garland herself was the first female recipient of The Cecil B. deMille Award 50 years ago)
9 Most nominations for one film, 1975?s Nashville, in a single year (the film only took home one statuette for Best Song)
8 Founding members of the HFPA (there are 88 listed on the Association’s website today)
7 minutes, 22.5 seconds Average time of Gervais’ monologues
5.5 lbs. Weight of the iconic statuette, which was introduced in 1946 by HFPA then-president Marina Cisternas
5 Golden Globes Rosalind Russell was nominated for and won (Number of Oscars: 0)
4 Actresses who have snagged two acting awards in the same year — Sigourney Weaver, 1989; Joan Plowright, 1993; Helen Mirren, 2007; Kate Winslet, 2009 (no actors have yet accomplished this feat)
3 Number of people who tied for Best Actress in 1989 (Jodie Foster, Sigourney Weaver, and Shirley MacLaine)
2 Cheeks seen by the audience when Jack Nicholson mooned the audience in 1990
1 Person to win the Golden Globe, Oscar, and Razzie all in the same year (here’s lookin’ at you, Sandra Bullock!)
0% Chance Gervais, Angelina Jolie, and Brad Pitt will head out for a celebratory “Animal Style” nosh at In-N-Out Burger after the show