Hilary Swank Goes Sci-fi in Sundance With "I Am Mother"

by Tina Jøhnk Christensen January 27, 2019
Share on FacebookShare on TwitterShare on PinterestCopy URL 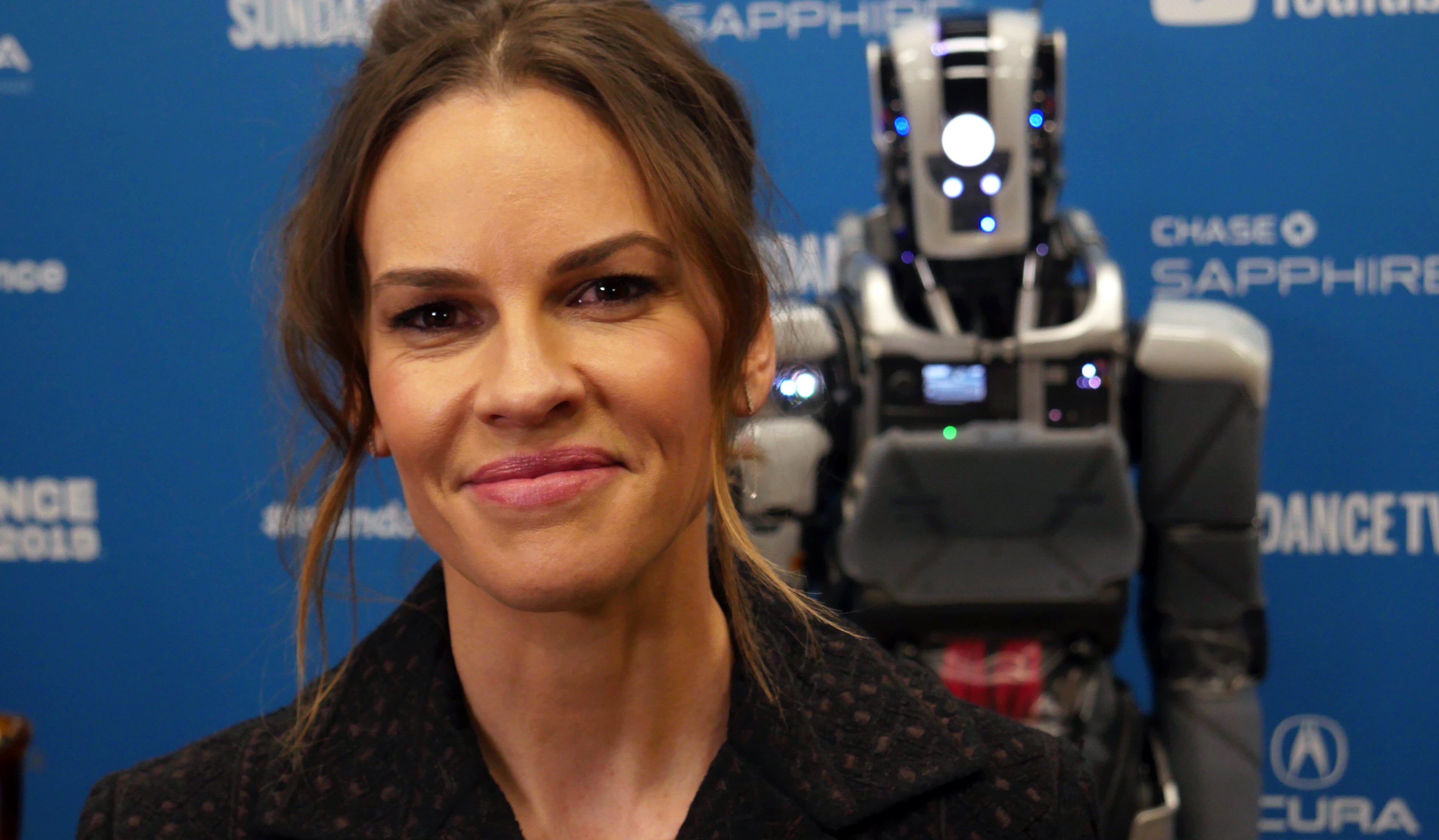 Hillary Swank shares the red carpet with Mother, the droid with dubious motherly insticts from the sci fi thriller I Am Mother, which premiered in Sundance 2019.

Hilary Swank is not usually associated with the sci-fi genre. But at this year’s Sundance Festival, the Golden Globe-winning actress stars in I Am Mother a post-apocalyptic thriller by first-time Australian director Grant Sputore. In the film, she simply plays ‘Woman’ – a female survivor of an “extinction event” – now living in a world in which robots have taken over raising children to save humanity. When she meets a young woman ‘Daughter’ she must convince her to trust her instead of ‘Mother’, the droid which has raised her from birth.

What made you connect to the script of I am Mother?

First of all, I am not a sci-fi fan, so for me to find this a page-turner was new. I thought it was thought-provoking and I thought it brought up a lot of interesting conversation about what would happen if for instance global warming wiped out the entire human species, which is not improbable – or our political climate caused it. There are a lot of things that we think about. What would happen if this were to happen: What do you do? So the idea of A.I. coming in and saying ‘ok, we are going to recreate the human race and we are going to make it right this time - and better.’ But what does that mean? What is better? That is so subjective, right? I do feel we are in a time right now where there is a loss of ethics and values and morals and such deep polarization that we cannot agree to disagree – it becomes fights. It just feels like we have stepped back and it just made me think about all that and survival and how far is too far? It was definitely a page-turner for me and it was emotional and entertaining.

What was your response to the way in which the films portrays the relationship between the Mother – a robot - and Daughter – a human being?

The whole idea of A.I. and a robot teaching morals, ethics values, which are human qualities that they do not actually embody themselves is interesting. How are they able to teach that? And how do you learn that from a robot and not a human being?  It is fascinating. When you watch the movie and it unfolds, you are trying to decipher who is good and who is bad between me as ‘Woman’ and ‘Mother’. We see Mother’s rug being pulled under her feet and we see her go through things that make us sympathize with her. Yet, that is such a projection of a human because Mother is not feeling anything. She cannot. So it is interesting how we see the world through our own eyes and how the world is what we see.

There is a lot of isolation in this film. How did you prepare yourself mentally for portraying that?

I really empathize with the characters that I play and try to put myself in their shoes. I was actually filming a Danny Boyle project at the same time so I was actually hoping from Italy to Australia to London to New Zealand and so that prepared me for exhaustion. The idea of having a great concept and then having it be well-written and then having it be open for changes – a line of dialogue here and there to always continue to elevate the concept. It was a great collaboration process across the board from Michael Lloyd Green our writer through to the actors and clearly to Grant Sputore. Something that inspires me more than anything is people who persevere and the idea that this woman clearly had experienced such devastation and how that affected her and how that changes your desire to survive and then how you overcome that and then you need to survive. I did not pull away from anything, I almost pushed into it more. 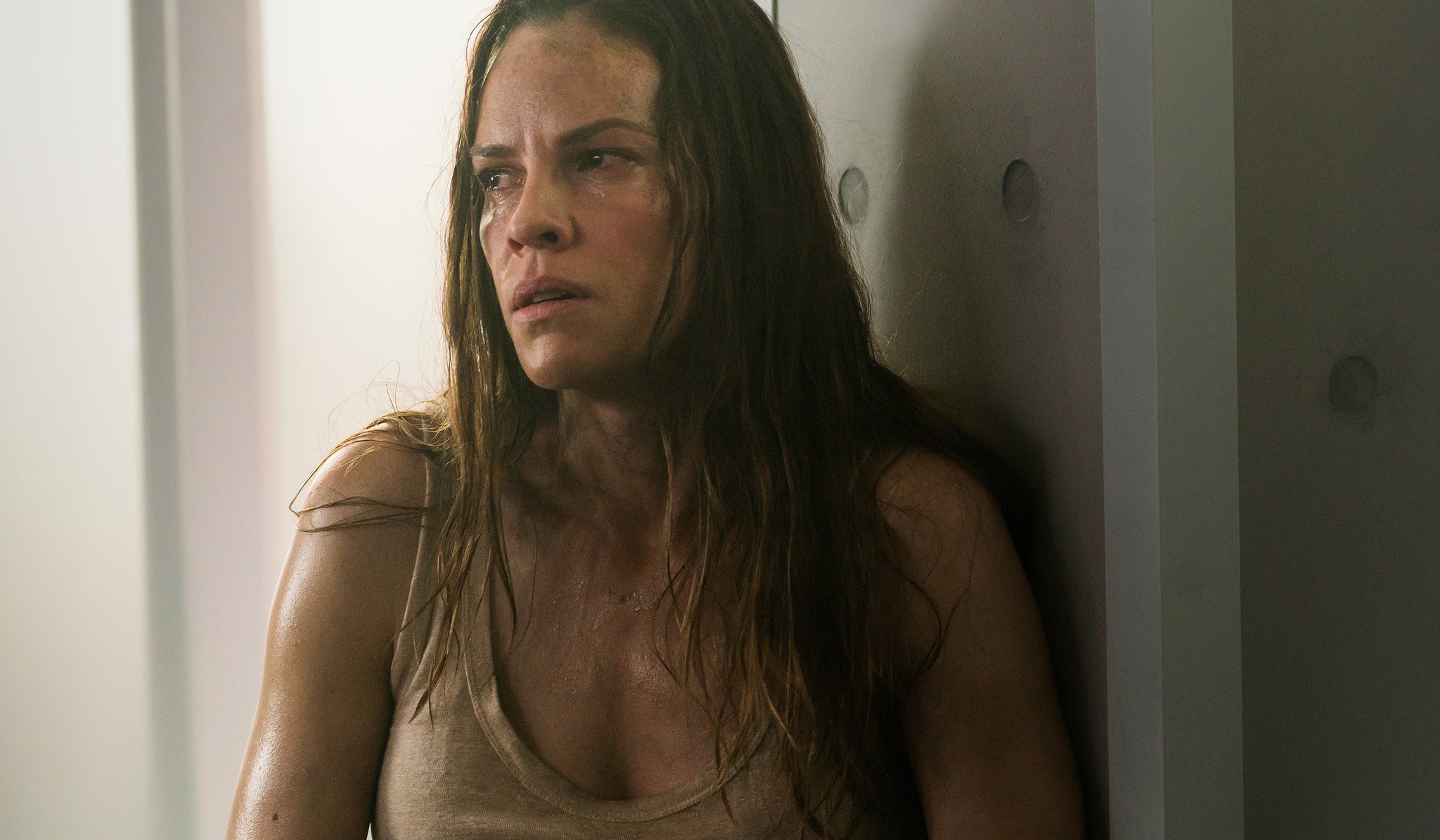 Hilary Swank in a scene from I Am Mother.

Yes. They are both in isolation. It is people in isolation and how they survive this. It is interesting because I did not think of that comparison till now because it felt so different from anything I have ever done. But I can see that.

Your character in I am Mother has clearly been through a lot. How do you as an actress cope with the emotional toll that your character goes through?

The interesting thing is that in my younger years, I had a lot more to work through. Especially when you are young, so I could dive into characters’ darkness and work through stuff of my own. But now I am in such a happy place in my life that a lot of times I get offered roles where I don’t want to go to that place. I like to play real people and I like to go into that but I do choose. Because you can logically say that this is not really happening, but chemically when you cry and you shake on the ground and your chemical make-up thinks you are really experiencing it. It takes over your brain and your thoughts, so it takes a little bit of getting back.

Does it worry you that we replace human interaction with technology more and more?

I am so thankful that I went through my childhood and high school without a phone. I was into my 30s when we got them. I am happy I grew up without them. But I do see the benefits of it. We can certainly communicate much easier. When my dad had a lung transplant, I was able to get hold of him immediately if there was any type of emergency. That is incredible. There are pros and cons to everything and not having a lot of experience with it, I don’t love it. I don’t like being on gadgets. It is not my thing and I much prefer the human contact and sitting down face to face at a dinner table having conversations.