by HFPA November 1, 2012
Share on FacebookShare on TwitterShare on PinterestCopy URL 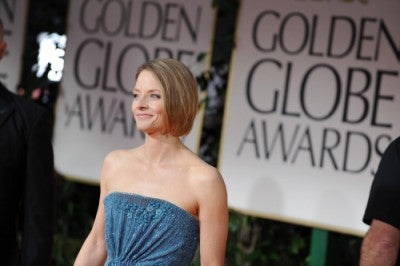 Actor, director and producer Jodie Foster will receive the Cecil B. deMille for lifetime achievement at the 70th Golden Globe Awards. Announcing this year’s choice at a press conference, HFPA president Dr. Aida Takla O'Reilly said “Jodie is a multifaceted woman that has achieved immeasurable amounts of success and will continue to do so in her career. Her ambition, exuberance and grace have helped pave the way for budding artists in this business. She’s truly one of a kind.” 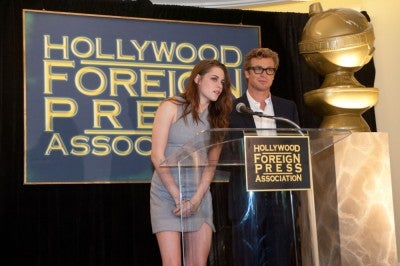 Kristen Stewart and Simon Baker announce the recipient of the 2012 Cecil B. deMille Award

Kristen Stewart, star of Walter Salles’ On the Road and of Twilight: Breaking Dawn Part II, and two-time Golden Globe nominee Simon Baker, star of the TV series The Mentalist, were presenters at the event.  Stewart was 12 years old when she co-starred with Foster in David Fincher's thriller The Panic Room, playing daughter to Foster's character.

Foster is a two time Golden Globe winner, both as best actress in a motion picture-drama: first in 1989, for The Accused, and then in 1992 for The Silence of the Lambs. In addition, Foster was nominated five other times, the most recent one  in 2011  for best actress in a comedy or musical for Carnage.

A long time veteran of  film and television, Foster began her career at age three, appearing as The Coppertone Girl in the television commercial. She then went on to become a regular on a number of television series. She made her feature debut in Napoleon and Samantha when she was eight years old.

In total, Foster has appeared in more than 40 films. In addition to her acting, Foster has always had a keen interest in the art of filmmaking.

Foster made her motion picture directorial debut in 1991 with the highly acclaimed Little Man Tate, in which she also starred. Her most recent film, The Beaver, which stars Mel Gibson, was released in 2011.  Since 1994 Foster has also become a producer, through her banner Egg Pictures.

The Cecil B. deMille Award will be presented to Foster at the 70th Annual Golden Globe® Awards on Sunday, January 13, 2013 at the Beverly Hilton Hotel.

Chosen by the HFPA Board of Directors, the Cecil B. deMille Award is given annually to the talented individuals who have made an incredible impact on the world of entertainment. Morgan Freeman was bestowed with the honor last year. Previous honorees include Lucille Ball, Bette Davis, Walt Disney, Harrison Ford, Judy Garland, Audrey Hepburn, Sophia Loren, Robert De Niro, Al Pacino, Martin Scorsese, Frank Sinatra, Steven Spielberg, Barbra Streisand, among many others.