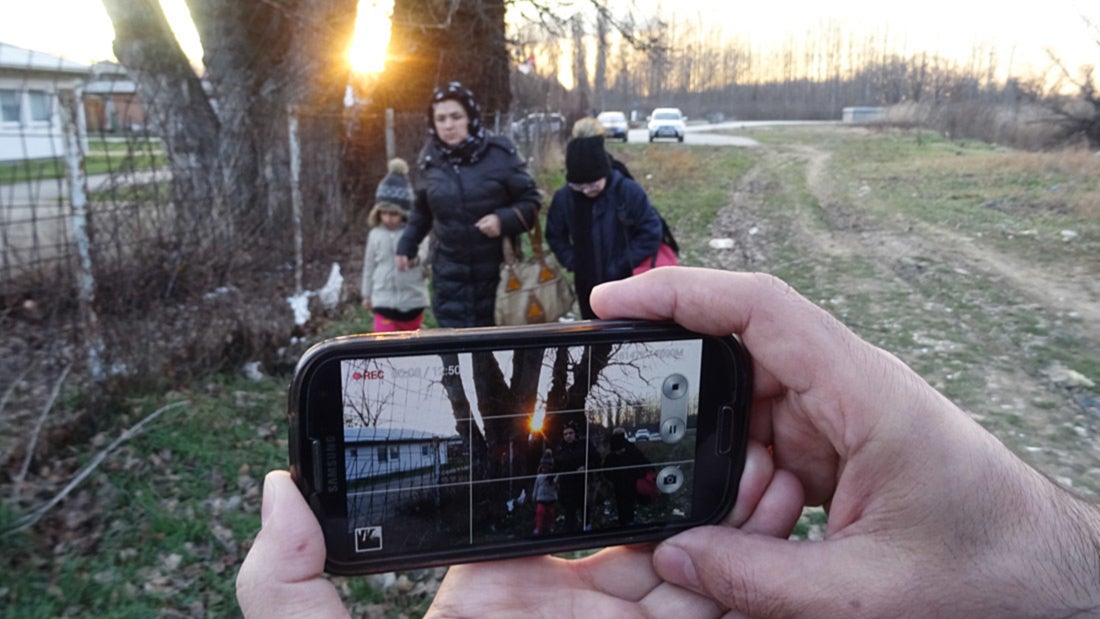 An intimately scaled, uniquely heartrending nonfiction film that serves as an emotionally fortifying takedown of the dehumanizing demagoguery dominating much of the discourse of the modern-day American political landscape, Midnight Traveler is a powerful snapshot of refugee reality, capturing the first-person dangers and universal love of a family on the run. Shot entirely on three cell phones and telling the story of a journey spanning over 3,500 miles and three-plus years, Afghan director Hassan Fazili’s movie, which just enjoyed its world premiere at the 2019 Sundance Film Festival, is a handcrafted, openhearted vaccination against ignorance and hate.

When the Taliban puts a bounty on the head of Fazili and his wife and fellow filmmaker Fatima, they are forced to flee Afghanistan along with their two young daughters, Nargis and Zahra. The family’s escape by van, taxi, and foot – and incorporating means both legal, and of the black market – takes them through the Balkan route across Europe, as they seek safety and, eventually, some type of long-term asylum. This odyssey brings them into contact with harsh outdoor conditions, human traffickers, white nationalist Bulgarian street gangs, government bureaucracy, refugee camps and more.

While filling in the backstory of the work that put him on the wrong side of the Taliban, and also telling the story of Fazili’s relationship with Hussain Hashemi, a former friend whose membership in the Taliban both exacerbated Fazili’s situation and helped to tip off the family of the threats against them, most of Midnight Traveler unfolds in an experiential fashion. Fazili, the cinematographer of 2012’s Voice of a Nation: My Journey Through Afghanistan, shows himself to have a great instinct for revealing character in miniature, by way of an accumulation of small moments.

He eschews almost all of the conventional levers of emotional stimulus, thereby lending his movie a sneaky, gut-punch emotionality. Of course, a scene of the girls covered in boils or bed bug bites is unsettling in a primal way, as is Nargis describing an unseen assault attempt in its immediate aftermath. But Midnight Traveler works so well because of how it captures the universality of the Fazilis’ daily struggles and care for one another, thus creating an investment in their story.

There are no big, probative interviews with the girls about their plight, used for cheap manipulation. Instead, there’s an affecting blend of more quotidian and glancing emotional scenes, as when Fazili is playing his daughters and Zahra, who is maybe around three or four years old, admonishes her father for dressing up like a Taliban member in order to better blend in, telling him she doesn’t like it and will eat him if he does it again. In another sequence, Nargis excitedly gets to play in water and talks unselfconsciously about one day getting to shower. Later still, she matter-of-factly says she looks forward to forgetting this trek as an adult.

Perhaps the most remarkable thing about Midnight Traveler, though, is the clear-eyed economy of its editing, credited to producer and co-writer Emelie Mahdavian. The film spans many years yet clocks in at under 90 minutes, so at times it (rather necessarily) jumps months forward in time – but never in a way that loses a viewer, or creates any temporal confusion about the Fazilis’ situation.

In fact, Midnight Traveler, anchored by a moody, lightly electronic score from Gretchen Jude, makes smart, sparingly effective use of voiceover from members of the family to move its narrative along. In one such passage, after Zahra goes briefly missing, Fazili describes, under an extended shot of the low-hanging moon, the self-loathing from thinking for just a fleeting moment of a constructed “scene” of finding his daughter’s body. He talks about how he hates cinema, and questions the value for his family in what he’s doing. It’s an understandable moment of doubt and self-judgment. But Midnight Traveler is a special achievement – a haunting, civilized rebuke of an inhumane world, and a call for empathy as an antidote.