by Lorenzo Soria April 15, 2019
Share on FacebookShare on TwitterShare on PinterestCopy URL 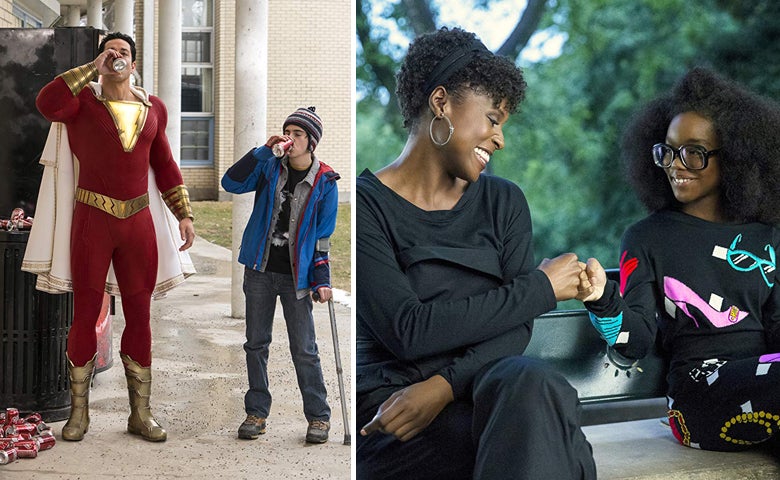 Zachary Levi with Jack Dylan Grazer in Shazam! (2019) and Issa Rae with Marsai Martin in Little (2019)

At the domestic box office this weekend the biggest new story was Universal's Little trouncing Lionsgate's big-budget Hellboy reboot. The winning underdog took $15 million on its US debut, finishing second behind Shazam! and soundly humiliating its opening day rival. Little, with its low profile cast of Issa Rae, Regina Hall, and Marsai Martin, is a play on the proven formula of sudden age change, taking inspiration from moves like 13 Going on 30, 17 Again, Freaky Friday and Big. In this Little, an overworked tech executive gets turned back into her 14-year-old self and enjoys being a lackadaisical teenager for a short time before trying desperately to get back to her old frenetic life. Little's budget wasn't small at $20 million but it’s doing fine so far. It made another $1.9 million in overseas plays.

Hellboy meanwhile had a devil of a time, ending its opening weekend in third place with just $12 million in the US and Canada. Lionsgate tried to reboot this series 11 years after the last Hellboy movie, The Golden Army, was put out by Universal. They weren't able to keep director Guillermo del Toro and instead opted to entrust the franchise to less tested Englishman Neill Marshall. Stranger Things' David Harbour also replaced previous lead Ron Perlman and was joined by Mila Jovovich and Ian McShane. Reviews have been fairly negative, and audience sentiment seems to agree with Cinemascore polls giving the film a C grade. Hellboy earned $10 million from 40 overseas territories, also a disappointing number, but majors France, Brazil, and China are yet to come.

Shazam! meanwhile held on to the top spot in North American with a $25 million second frame, and now sits at a domestic total of $95 million. It held well overseas with the exception of China where the film had a massive 84% drop from last weekend. The PRC is however still its biggest foreign market at $40.4 million, followed by the UK at $11.7 million and Mexico at $10.1 million. Shazam!'s global cume so far is $258 million.

One surprise on the international market this weekend was teenage romance After from recently formed distributor Aviron Pictures. It only made $6 million in the US, but was a huge success in Europe, earning $12.3 million and taking first place in Italy and Germany. This small budget adaptation of a popular series of young adult novels by 30-year-old Anna Todd is about a girl dating an English boy based on one of the members of the mid-decade boy band One Direction, played by Ralph Fiennes' nephew, Hero Fiennes-Tifflin. Josephine Langford plays his love interest. Reviews have been pretty negative but global sales at this point are at $18.3 million against a reported $14 million budget.

Next weekend won't have any major new entries in preparation for Avengers: End Game's opening the following frame on April 26. Among those braving the calm before the storm are The Curse of La Llorona, a horror pic about a Mexican folk monster from Warner Bros., and nature film Penguins, from Disney.