by Lorenzo Soria April 3, 2017
Share on FacebookShare on TwitterShare on PinterestCopy URL 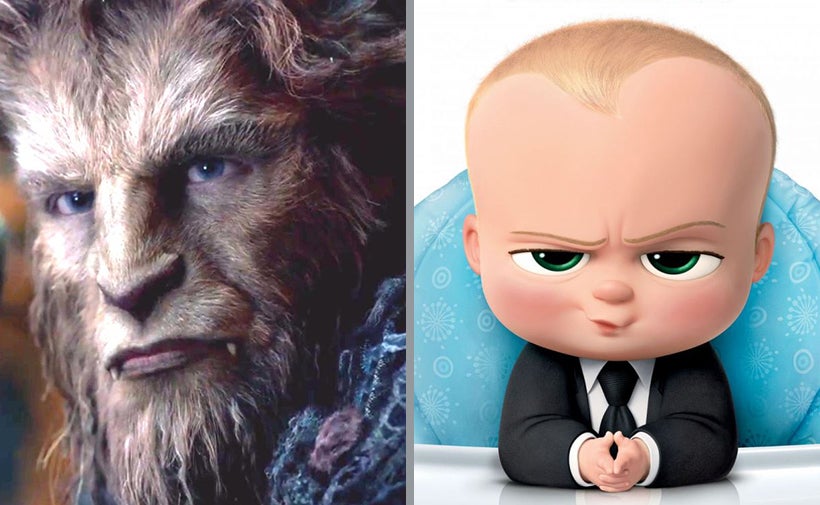 Beast from Beauty and the Beast and The Boss Baby

DreamWorks and Fox’s The Boss Baby put March monster Beauty and the Beast in the pram this weekend with a big boy $49 million domestic debut. An all star vocal cast made of Alec Baldwin, Jimmy Kimmel, Tobey Maguire, Lisa Kudrow and Steve Buscemi brought this adorable little adventure to life under the direction of Madagascar series helmer Tom McGrath. Baldwin plays Theodore, a neonatal corporate warrior from Baby Corp., an organization of under-twos dedicated to looking out for the well being of babies around the world. The little captain of industry can’t stay unoccupied for long, and soon finds himself setting up focus groups and organizing a campaign to take market share from his company’s arch nemesis: Puppy corp. In the midst of this, his adoptive older brother discovers that he can talk, and the two come to an uneasy agreement to help each other carry out Baby Corp’s aggressive business plan. The Boss Baby also made $36.2 million overseas for a $108 million global launch. It scored a record opening for DreamWorks in Mexico with $6.5 million, and after two weeks in Russia has hit $21.5 million, making it their ninth biggest animated picture ever. It made $4 million in Australia and $3.1 million from previews in the UK, where it goes into wide release on April 7.

While they crawled all over the competition with their new animated hit, DreamWorks had a harder time hitting the target and made just $19 million with new Sci-Fi action flic Ghost in the Shell. A coproduction with Reliance and Paramount, Ghost is a visually stunning, borderline philosophical adrenaline fueled action bonanza from Snow White and the Huntsman director Rupert Sanders. It’s an adaptation of an acclaimed Japanese multimedia phenomena of the same name, which has won praise and legions of fans for its comic books, television series, animated films and video games. The film is set in a near future world where robots are a part of daily life and the line between man and machine is becoming hard to distinguish. Scarlett Johansson stars as The Major, a cyborg created by implanting a human brain into a fully mechanical body, the first of her kind. She is incorporated into an elite commando unit called Section 9, led by actor and cult director Takeshi Kitano and Chief Daisuke Aramaki. When a terrorist cell begins targeting scientists from the division that made Major’s body, she finds herself confronting her identity and grappling with a past that she, at first, can only see in passing glimpses. Ghost found relatively more traction in Asia, with first place openings and notable $1.2, $1.1 and again $1.1 million openings in Hong Kong, Indonesia and Taiwan. It made $5.3 million in Russia, $.1 million in France, and $2.8 million in the UK. Foreign sales are $40.1 million to date, giving Ghost a $59.1 million cume to date. China and Japan, both anticipated to be big territories for the film, have their openings next week.

While it may have slipped from the peak of the charts in the U.S. and Canada, Beauty and the Beast was once again the number one property worldwide. It made $114 million global, with $47.5 million in the U.S. and Canada, $1.4 million new market in the Netherlands and $2.4 million in Malaysia, where it won a battle with the country’s censors to show a gay subplot between Gaston and his sidekick. China reached $80.6 million, the UK $64.6 million and the lifetime cume soared to $876.2 million. The billion mark is not so far away.