by Lorenzo Soria May 30, 2017
Share on FacebookShare on TwitterShare on PinterestCopy URL 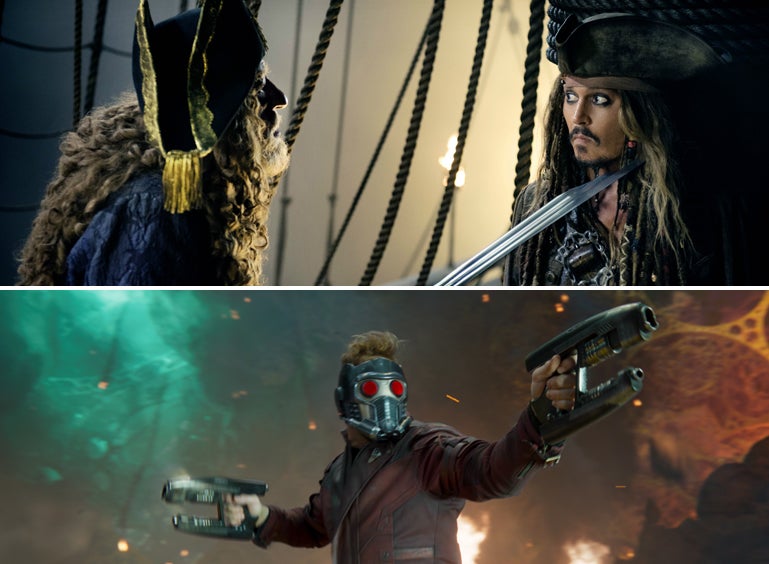 Scenes from Pirates of the Caribbean: Dead Men Tell No Tales and Guardians of the Galaxy Vol. 2

Disney’s unsinkable galleon took to the seas and found $285.8 million of treasure with Pirates of the Caribbean: Dead Men Tell No Tales. Johnny Depp returns for the fifth time as Captain Jack Sparrow and has a new nemesis in Armando Salazar, a zombie Spanish admiral played by Javier Bardem. He’s out for revenge after having had his flagship destroyed and his entire crew turned into ghosts. This $230 million behemoth picture has already made port in 54 foreign territories including the rich waters of China, where it picked up an outstanding $67.8 million debut over three days. That’s already more than both of the preceding Pirates movies made in their entire runs, and a national boat racing holiday that stretches until Tuesday will see that figure continue to rise significantly throughout the week. P5’s next biggest market was Russia where it made a hefty $18.4 million and recorded a local record as the biggest weekend launch in history. Then there was South Korea where it finished with $11.5 million, followed by France at $9.1 million with Germany close behind at $8.3 million. European numbers on the whole were off in the wake of the Manchester bombing but the UK itself was naturally hardest hit. Britain’s box office returns were just $6.1 million as many were both in shock and uneasy about the idea of packing into a crowded public place after last Thursday’s horrific attack. Australia also had a soft opening, with $4.1 million despite having hosted the entirety of Pirates’ filming.

As well as things went for Captain Jack and his familiar crew of silver-tongued criminals overseas, their sailing was not smooth in domestic waters. The US and Canada kept their booty well hidden and yielded just $77 million in the worst Memorial Day weekend at the box office in more than 15 years. While US revenues have significantly fallen this summer, the world markets on the whole are in good shape. Just in the Pirates franchise, as an example, foreign sales have gone from $349 million in 2003 with Curse of the Black Pearl to $805 million for 2011’s On Stranger Tides. P5 now has the platform to go on to be a spectacular hit, despite its less than stellar showing in the States.

Paramount will be hoping for similar luck after their own seaside adventure Baywatch came up with a launch of just  $22.5 million, good for third place. Dwayne Johnson stars in this poorly received $70 million reboot of the 90s cult hit that put Pamela Anderson into the imaginations of men across the world and gave us the strange German cult of David Hasselhoff. Both of them make a cameo appearance but the main cast is filled out by Kelly Rohrbach in Anderson’s role as the blonde lifeguard and Zac Effron as Johnson’s sidekick. Baywatch starts its foreign roll out next weekend and at Paramount they will be praying there’ll be some pirate luck waiting for them.

With these new releases sputtering at home, there was still space for Guardians of the Galaxy Vol. 2 at the top of the charts. Marvel’s interstellar comedy adventure took second place with $27 million over four days. It has reached $338 million in the US and $783 million worldwide.

Next week we’ll see how Wonder Woman does against this crop of chart toppers and find out if there’s any room for Captain Underpants in a crowded global box office.

Festivals
The Florida Project: Life Around the Corner from Disney World
May 28, 2017
Industry
Women Raising the Voices in Cannes
May 30, 2017