by Lorenzo Soria October 23, 2017
Share on FacebookShare on TwitterShare on PinterestCopy URL 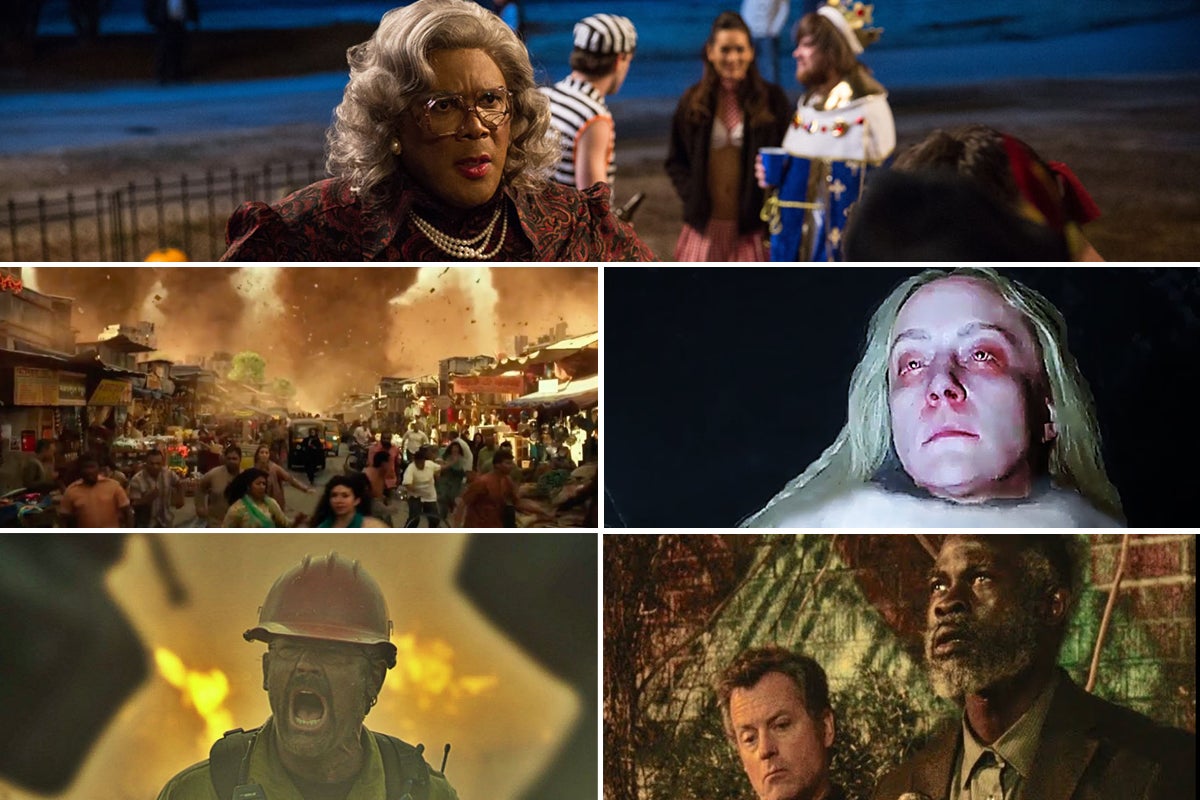 Scenes from: Boo 2! A Madea Halloween, Geostorm, The Snowman, Only the Brave and Same Kind of Different as Me

In this weekend’s box office race four major contenders were swept aside by Tyler Perry’s $21.7 million comedy Boo 2! A Madea Halloween. Mega budget flop of the year contender Geostorm, cold weather thriller The Snowman, firefighter drama Only the Brave, and Christian feel good tale Same Kind of Different as Me all succumbed to Mr. Perry’s comedy horror drag act. Boo 2! is the ninth Madea film and marks another win for what is easily the highest grossing African-American oriented franchise of all time. In this edition Perry again plays his famous foul-mouthed octogenarian Madea, taking her on an adventure to save her granddaughter Tiffany (Diamond White) from a real house of horrors. When she and her teenage friends decide to go to a party infamous for losing scores of guests to suspicious accidents, it’s up to Madea and her grey haired gang to rescue the suicidal millenials. As per usual in this series, critical reviews were as bad as theatergoer’s opinions were enthusiastic, leaving Boo 2! with an 8% aggregate positive score on Rotten Tomatoes and an A- Cinemascore. Like most films aimed at black audiences international appeal is scarce, with just one overseas market, South Africa, on the movie’ docket.

Now moving on to this weekend’s losers, Warner Bros’ $120 million disaster flic Geostorm looks stillborn with just $13.3 million coming from its North American debut. Gerard Butler stars as a retired space shuttle commander who is called into action when a terrorist threatens the fate of the entire planet. The premise is that the US has developed a system of weather control satellites and a hacker is using them to destroy humanity. Dean Devlin, known for producing the Independence Day films, is the director, and was forced into costly reshoots after the studio disapproved of his first cut. Hurricanes Irma, Maria and Jose did their part in the movie’s undoing as well, killing the nation’s appetite for natural disasters in the wake of their destructive run through the American South and the Caribbean. Total meltdown has so far been avoided by better overseas plays. Geostorm moved into 50 foreign territories for a gross of $36.4 million, leaving it with a global haul of $62.9 million to date. Biggest market South Korea was good for $5.4 million, followed by Mexico at $4.9 million and Russia at $3.8 million. Geostorm opens in China on October 27, where it could still find a Far-East miracle to save it.

Next in our batch of Madea victims is Sony’s Only The Brave. Josh Brolin stars as a no nonsense fire station chief in a drought ridden Arizona town that’s ready to ignite. OTB came in fifth place with $6 million. While it did have strong reviews, opening directly in the wake of the northern California wine country fires that killed the nations’ appetite for burning may have cost it dearly. After failing to drum up enough social buzz, Sony sought to turn its marketing towards Middle America, inviting heartland political figures to a big event in the capital. Sadly this didn’t pay off and Sony will most likely take a loss on their $38 million investment.

Again moving down the totem of disappointments we find The Snowman. This thriller stars Michael Fassbender as a detective chasing down a serial killer who leaves his sculptures at his crime scenes. A solid cast rounded out by Rebecca Ferguson, Charlotte Gainsbourg, J.K. Simmons and Val Kilmer wasn’t enough to save the film’s performance. Snowman is already on thin ice, with an opening of just $3.4 million against a $35 million budget.

Finally at the bottom of the newcomer’s podium we have faith-based Same Kind of Different as Me. Greg Kinnear stars in this flic about a mystical black man who leads a rich white family out of temptation in small town America. It opened to just $2.6 million.

For a bit of good news to end with we have Kingsman: The Golden Circle crossing $300 million after a big $51.7 million global weekend. Chinese comedy Never Say Die also crossed the same milestone, riding a $15 million weekend to a worldwide gross of $309 million. Also on the winner’s list, low budget Thai comedy Bad Genius had a $7.5 million weekend in China and reached $42.3 million in its three current territories.

Next weekend we’ll see the debut of Saw series follow up Jigsaw, and George Clooney’s Suburbicon.