by Lorenzo Soria October 30, 2017
Share on FacebookShare on TwitterShare on PinterestCopy URL 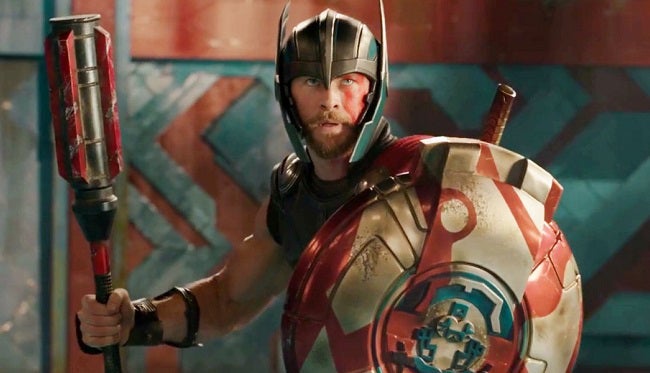 This weekend Thor: Ragnarok dropped its hammer on 36 territories while Jigsaw kept the horror train rolling and Geostorm got downgraded to a category zero in the US. Disney and Marvel’s superhero smash opened to $107.6 million in an overseas run that included $15.8 million in the UK and as much in South Korea. Ragnarok sees Chris Hemsworth’s title character team up with The Hulk (still Mark Ruffalo) to defeat his older sister, the witch queen Hela (played by Cate Blanchett). The film is directed by New Zealander Taika Waititi, known for his vampire comedy What We Do in the Shadows, making his Hollywood debut in the biggest possible way with this $180 million feature. Ragnarok scored big in Australia, Brazil, and France as well at $8.4, $8.3, and $7.4 million. Thor 3 opens in the US and China next weekend, and we’ll have a better idea of whether this will be a major phenomenon or just a massive hit.

Going back to the US, George Clooney’s Suburbicon, starring Matt Damon and Julianne Moore, opened in over 2,000 theaters to just $ 2.8 million. The crime comedy, originally written by the Coen brothers, turned out to be the worst US launch of Clooney's directing career. It was also one of the worst openings of Matt Damon’s acting career, and in Paramount's history. Suburbicon was good for only ninth place, while the top spot went to Saw series follow up Jigsaw. This latest installment, the eighth in the now thirteen year old series from Lionsgate, is set ten years after the death of John Kramer, the original Jigsaw killer. Overseas plays for Jigsaw were worth another $9.5 million, with top territory the UK clocking in at $2.3 million.

A host of foreign films opened strongly in their home markets.  The next biggest new film worldwide after Marvel’s Thor was German comedy Suck Me Shakespeer 3, also called Fuck You Goethe in its native country, where it opened to a huge $18.3 million. This curiously titled film series is about an ex-con named Zeki Muller who gets a job as a substitute literature teacher at a ghetto high school. While he was in jail his girlfriend hid the stash from their last take in what she thought was an abandoned building, only for a fully attended secondary school to be opened there shortly after. Three movies later he’s still a teacher and the film’s antics are so hotly anticipated in Germany that Disney, afraid to go against Suck Me Shakespeer 3, pushed it’s Thor launch back to next week.

Down in Mexico however the studio began the global roll out of its latest animated feature, Coco, with an $8.4 million release in that country. Gael Garcia Bernal voices a young boy who dreams of being a singer. When he finds a magical guitar on the eve of Dia de Los Muertos, the boy is transported to the Land of the Dead where he’ll need the help of his ancestors to escape and fulfill his dreams. Joining Bernal in the voice cast are Benjamin Bratt, Renee Victor, and Edward James Olmos. Coco will move north into the US on November 23, a clever spot between Thor and the December 15 Star Wars release.

Last among these single market foreign hits is French comedy Marry Me, Dude (Epouse-Moi, Mon Pote.) It opened to $5.3 million in its native country and tenth overall on the global chart. MMD is about an immigrant who is forced to marry his roommate after trouble on a big night out has him risking deportation.

Among holdovers, Geostorm made $49.3 million overseas, and a considerably more depressing $5.6 million in the domestic market. With $136.9 million against a budget of $120 million before promotion and advertising costs, this still isn’t enough to rescue a profit. Bladerunner 2049, which made $20.5 million worldwide this weekend, is in a similar position, with  $223.3 million banked against a $185 million budget. It meanwhile made $8.7 million worldwide and landed at a fitting $666 million global cume. Boo 2! A Madea Halloween made another $10 million at home, taking its gross to $32.2 million.

Next week we’ll see how well Thor does in its US launch and follow the odd early November release of A Bad Moms Christmas and Denzel Washington’s legal drama Roman J. Israel, Esq.