by Lorenzo Soria September 25, 2017
Share on FacebookShare on TwitterShare on PinterestCopy URL 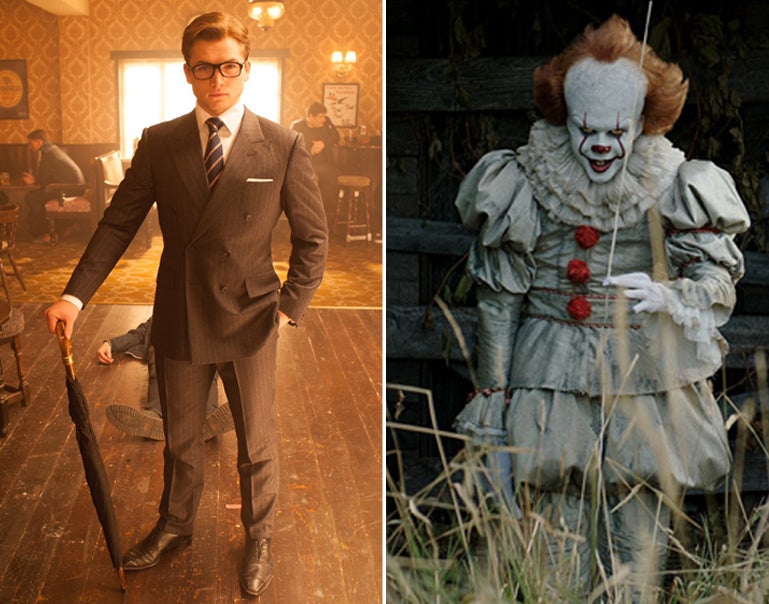 Scenes from Kingsman: The Golden Circle and It

Looks like the reports about the death of movie theaters, and of the communal experience of enjoying images of people larger than life on the big screen, have been greatly exaggerated after all. Just a few weeks after the summer’s dismal numbers and the failure of several blockbusters led analysts to predict the end was coming and that the future belonged to streaming and some other technology yet to come, September has turned into something of a miracle month for the industry. The biggest boost came from It, based on the Stephen King’s epic horror novel and centered around a group of teenagers terrorized by a killer clown called Pennywise. In the film’s third week out in the domestic market the Warner Bros. picture generated $30 million, good for second place, while 59 foreign territories grossed $38.3 million. The global cume is at $478 million and will pass the half billion milestone by midweek. The US alone is at $266 million, an all time record for a horror film. Overseas leader the UK is already at $35million, while Mexico is over $21 million and is a sign that horror continues to do well in Latin America. Argentina opened this weekend with over $4 million.

Now a new film is continuing the positive trend and the top spot both on the home chart and abroad this weekend went to Kingsman: The Golden Circle, with an opening take of $39 million. Directed by Matthew Vaughan, who reteamed with his Secret Service stars Taron Egerton and Colin Firth, and brought in Mark Strong, Halle Berry, Julianne Moore, Jeff Bridges and Channing Tatum, the film fell short of some projections but it made enough money to gain the distinction of being the fifth best September opening ever. Overseas, the R-rated spy film distributed by Fox opened as number one in 55 countries, generating an extra $61.2million. The UK, where the film is set, was good for $11.1 million.

Meanwhile there is another Fox film that has been around for a while and that keeps collecting dollars and all sorts of foreign currency: War for the Planet of the Apes. It opened last week in China and got an extra $19.1M there in its second session, bringing the total out of the Middle Kingdom to $100 million. Globally, with a cume of $478 million and Japan still to open, Apes is now very close to passing the $500 million mark.

If Warner’s (and New Line) had reason to open the champagne for It, they may be putting a few cases back in the cellar after The Lego Ninjago Movie’s weak start. The third film in the franchise, LegoGo had a domestic debut of just $10 million, while 37 international markets generated $10.5 million. This is against a budget of $70 million before P&A. In other overseas news, Spider-Man: Homecoming has turned into the top superhero movie of the year. With a global cume of $874.4 million, the Sony/Marvel adventure is now officially ahead of Guardians of the Galaxy Vol. 2 ($863.4 million) and Wonder Woman ($819.6 million). Tom Cruise’s American Made added $6 million in 57 territories, for an international total of close to $60 million. Next week it will face a major test: the debut in the US and Canada.

On the so-called specialty market Stronger, starring Jake Gyllenhaal in the role of real life 2013 Boston Marathon hero Jeff Bauman, had a start of  $1.75 million. Next on the art chart, and in its eighth week of release, the Weinstein Co.’s Wind River, a crime drama set in an Indian Reservation, earned an extra $1.2 million to reach $31.6 million. Fox Searchlight’s Battle of the Sexes, the true story behind the 1973 tennis match between Billie Jean King (Emma Stone) and Bobby Riggs (Steve Carell), squeezed an auspicious $525,000 out of just 21 theaters. Then we have Focus Features who, after having tested Victoria and Abdul in 20 territories, for a total of over $12.5 million, released the film starring Judi Dench as Queen Victoria in 4 US theaters. It made $152,000 for a promising per-screen average of $38,000.

Next weekend, along with American Made, we’ll see a remake of 1990 cult hit Flatliners, starring Ellen Page, Diego Luna, and Nina Dobrev and coming of age thriller Super Dark Times.