by Elmar Biebl December 23, 2013
Share on FacebookShare on TwitterShare on PinterestCopy URL 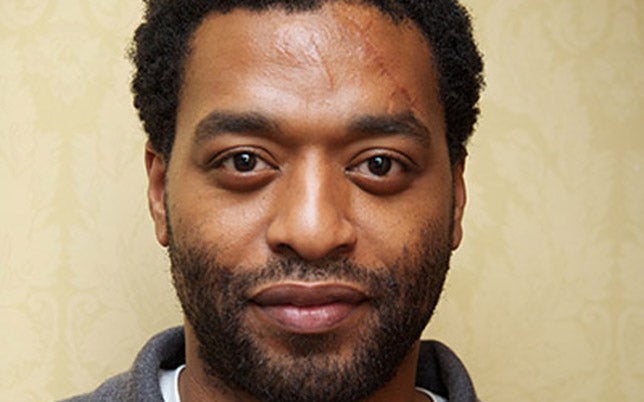 The crowd, congregating in the hotel-size kitchen, was exuberant, hyper and noisy. Just what you’d expect at a party in a producer’s mansion on top of the Hollywood Hills! Okay, I thought: “Been there, done that." Then, my eye fell on a guy who just stood there – not even close to the sensational fig-sauteed sliced fennel – just talking to someone. I felt...what? Something like a gravitational pull? For the first time I observed live what I had seen many times before on a screen – the magnetic presence of Chiwetel Ejiofor.

I had seen his scene-stealing performances in Love Actually (2003), Woody Allen's Melinda and Melinda (2004), in Inside Man (2006), Children of Men (2006), American Gangster (2007), and in Talk to Me (2007). His first American lead was in David Mamet’s martial arts film Redbelt (2008). His role in Kinky Boots (2005) got him his first Golden Globe nomination. He would be nominated by the HFPA again the following year for Tsunami: The Aftermath and for Endgame in 2009. This year he has upped the ante and will come to the show with a double nomination: For Best Actor in a Motion Picture actor 12 Years a Slave as well as in TV Miniseries Dancing on the Edge.

The five-time nominee first caught my attention in 2002; in Dirty Pretty Things he played a Nigerian physician living illegally in London. To his horror he discovers a human heart blocking a toilet – suddenly he is confronted with a most unsavory aspect of London’s criminal underworld. He was only 25 at the time, the role required a man in his forties. But director Stephen Frears was right to cast Chiwetel: as soon as he appears on screen no-one cares about his age. There was something in the eyes of this man that... simply seemed to draw you in.

Chiwetel Ejiofor is in fact of Nigerian descent. His father was a physician, his mother a pharmacist. The names of his parents are almost as challenging to Western tongues as his own: Arinze and Obiajuli Ejiofor. Their son was born in London’s Forest Gate on July 10, 1977. Most parents consider the fact that their children have to cope with their names for the rest of their natural lives and call them John, Paul or, maybe, if they are feeling ambitious, Cameron. But his parents baptized him ... Chiwetelu Umeadi Ejiofor.

No wonder, neighbor kids and classmates called him Chewy. He hated it.

As a teenager his mother’s passion for Shakespeare took root in him. She encouraged him to take a role in the school production of Measure for Measure. He loved it. Not long after that he enrolled in the National Youth Theatre where he excelled, then the London Academy of Music and Dramatic Art. He saw himself as a stage actor but then, in 1997, something totally unexpected happened: A call from Hollywood. Steven Spielberg was preparing Amistad, a film about a ship loaded with African slaves and Chiwetel was hired to portray the translator between the Americans and the Africans. Not even his first taste of Hollywood was reason enough for him to change his name.

Through the years he tried to follow his original passion, performing live on stage. The title role in Michael Grandage’s Othello with Ewan McGregor as Iago must have been one of his greatest triumphs: he won Best Actor at the 2008 Olivier and Evening Standard Theatre Awards.

But Hollywood by now is this actor's second home. His role in 12 Years a Slave is a prime example of Chiwetel Ejiofor’s art of acting. The suffering of an enslaved man bleeds through to us with quiet intensity. No sentimentality, no gimmicks. Whether he wins a Golden Globe (or two!) or not, he deserves our congratulations.