by Luca Celada December 24, 2013
Share on FacebookShare on TwitterShare on PinterestCopy URL 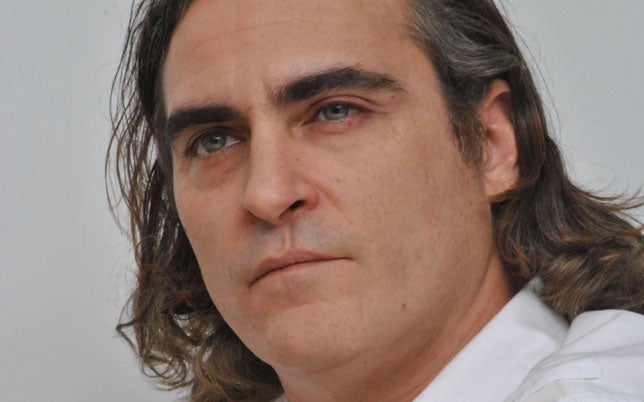 Some great actors are as comfortable in front of a press line as they are in front of the camera; others, not so much. No one for instance has ever accused Joaquin Phoenix of answering journalists’ questions as effortlessly as he disappears into the characters he portrays onscreen. Those have included the emperor Commodus in Ridley Scott’s The Gladiator for which he was nominated for a Golden Globe, singer Johnny Cash in Walk the Line, for which he took home the Best Actor prize in 2006, and for good measure the spiritual drifter from The Master, the role with which he complotted a Golden Globe nominations trifecta.

Now the 40 year-old actor has made it four with a well-deserved nomination as Best Actor in a Motion Picture Comedy for his performance in Spike Jonze’s sci-fi romance Her. The man he portrays in the film, Theodore Twombly, is a quiet, soulful man who has not fully recovered from a failed marriage. At work he writes letters for an on-line service, vicariously embodying strangers’ emotional intimacy. At the same time he is unable, in his own life, to fulfill his romantic nature.

All that changes when he installs a new operating system that is virtually human. His relationship with the sultry voice emanating from his computer (Scarlett Johansson’s) deepens until man and machine fall in love. It may not be the first cyber-human love story in the history of film, but it is likely the most believable: A commentary on the increasingly pervasive role of technology in our social lives.

The film imagines the imminent advent of artificial intelligence and “emotional machines,” the so-called “Singularity,” first postulated by futurist Ray Kurzweil and that many technology experts consider to be an inevitable coming development. It's a technological prospect that some may find unsettling; not Phoenix, however: “I think it’s very exciting,” he recently said on the subject, “I think it’s just the next evolutionary step. I love the idea of Ray Kurzweil, and some of his ideas about the future I think are really exciting. It doesn’t make me nervous at all. I think there will be a point where we merge with technology and I think it’s going to be cool.”

As much as the film is about our technological future, the story principally works as a meditation on the nature of love, relationships and the human need for emotional connections. And even as technology evolves at a pace that is ever more breakneck, that fundamental nature does indeed seem immutable. The question lies at the heart of Jonze’s touching, literary and thoroughly original tale of future love and alienation.

The fact that what sounds as a far-fetched conceit unfolds so naturally onscreen is a testament to Phoenix’s tour-de-force solo performance. Most of the scenes, including many intimate ones, required him to act alone with a camera only inches from his face. His only interaction was with a disembodied voice (interestingly, on the set that voice belonged to actress Samantha Morton and only during post production did Jonze decide to ask Scarlett Johansson to revoice the part).

The role marks a high point in Phoenix’s already impressive filmography; and yet with his three Academy Award nominations and now four Golden Globe nods, the actor can still come off as somewhat awkward in his public interactions, as if conditioned by an extreme shyness.

He has at times seemed to intentionally keep the press and his fans off-balance as with his elaborate “hoax” a couple of years ago, when he publicly announced his retirement from acting in favor of a new career in rap music. The “experimental role-playing,” reminiscent of Andy Kaufman’s more bizarre happenings, turned out to be part of a full-immersion role for a film directed by long-time friend Casey Affleck. Some in Hollywood were less than amused. With The Master, it became apparent that he was far from retired. His work in Her should go along way in convincing any remaining skeptics that he is one of the best actors of his generation.