by Patricia Danaher January 4, 2014
Share on FacebookShare on TwitterShare on PinterestCopy URL 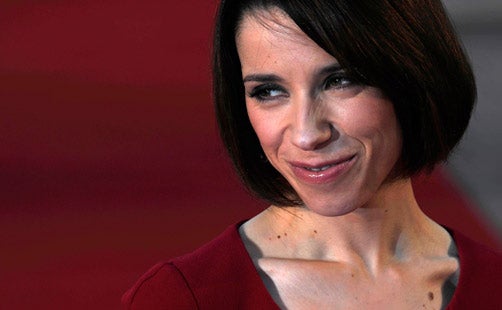 Since she erupted onto international consciousness and cinema screens in Mike Leigh’s Happy Go Lucky in 2008, Sally Hawkins has become synonymous with a kind of lightness and ease that belies serious insight and wisdom. That role won her a Golden Globe as best comedy actress, as well as multiple other awards. Now, in Woody Allen’s Blue Jasmine, she brings some of the same sly skills to a new role.

Playing the unsophisticated sister to Cate Blanchett’s titular character, the movie shows her to be way more adept at managing life and friendship than her formerly well-heeled sibling-turned-roommate. For her role as Ginger she’s been nominated for her second Golden Globe, this time as Best Supporting Actress. It’s her second movie with Woody Allen. She starred in Cassandra’s Dream in 2007.

Sally has a way of making these roles look effortless, something like an extension of her real personality and in person, she comes across as very cheerful and indeed, happy go lucky. “Women have had to play it cleverly from the sidelines for a long time in different industries, to try to get their point across. The women I admire the most are the more soft spoken ones who actually listen,” she said. “If someone is shouting at me, I turn off and stop listening. There are many times I’ve ranted and raged and stamped my foot and got upset and nobody was listening. When you say something with a smile, it makes the world a happier place and everyone appreciates it.”

Sally Hawkins was born in Dulwich, UK in 1976, the daughter of two accomplished children’s books illustrators. She grew up surrounded by literature and story. She studied acting at RADA and was, by her own admission, “a really terrible waitress” until her career as an actor began to take off in London theatre and TV roles.

The approaches to directing of both Allen and Leigh are quite unique and challenging in different ways for actors. Leigh famously never lets the actors see the full script and relies a lot on improvisation and long periods of rehearsal. The director sometimes meets the actors for barely a minute before deciding whether to cast them.

“I knew Woody from Cassandra’s Dream so I had a bit of a head start when it came to Blue Jasmine. He’s such an icon that when you meet him, you have to try to get that out of your head. Woody is very relaxed on set. He just says how it is and if he doesn’t like it, we’ll just go again. There’s no real drama. If he panics, he does it like a swan – elegant, graceful. He’s a real pleasure to work with.”

Away from acting, Sally is a voracious reader, an appetite which she credits with getting her into acting in the first place. She has starred in an adaptation of Jane Eyre as well as Kazuo Ishiguro’s “Never Let Me Go.”

“When you have an opportunity to translate a good piece of literature to the screen, it’s remarkable and I love doing that,” she said.