by Silvia Bizio December 29, 2014
Share on FacebookShare on TwitterShare on PinterestCopy URL 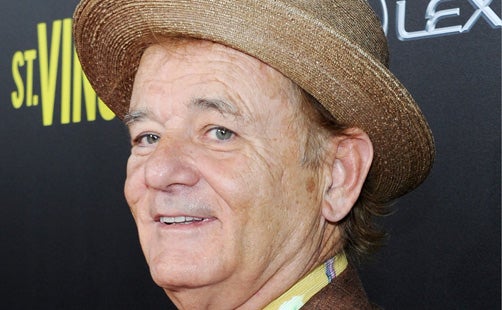 Born and bred in Illinois, Bill Murray, 64, is a beloved "cult" actor who has built a career on debonair and charismatic rogues but in real life is often reserved. An iconic funnyman with an expression as deadpan as his irony, he has put those qualities to good use in his various film roles throughout the years. Since the years of Saturday Night Live (he started there in 1975) and of course the seminal Ghostbusters (1984), that just celebrated the 30th anniversary, Murray has been the fascinating, bizarre and inspirational "nowhere man". An actor who’s "less is more" technique has even been studied in film school. His latest character for the Golden Globe-nominated St. Vincent simply confirms his talent.

Directed by Ted Melfi, this odd little film about a friendship between a bullied kid and a cantankerous misanthropist and Vietnam Veteran, earned Murray his fourth Globe nomination as Best Actor – Comedy or Musical (he won a Golden Globe in 2003 for Lost in Translation). This year he is a double threat as he also is nominated in the Best Supporting Actor - Motion Picture Made for Television category for the HBO film Olive Kitteridge.

"I tend to say no to the offers I receive as actor, more than yes," says Murray. "I don't know how other actors function in their way of conducting business, but I need to believe deeply in a script before committing to it. Otherwise I would feel kind of whorish...". Twice divorced, father of six children, Murray is extremely private in the way he conducts his life, famously jokes about his own laziness, and certainly has demanding standards regarding his film choices. But recently he seems to be getting a second wind and he's becoming, if not a workaholic, at least a steady presence on the screens, big and small. He was seen in Monuments Men last year, had a role in the TV series Alpha House, a small role in Dumb and Dumber To, and after St. Vincent he worked on the yet-untitled new Cameron Crowe project besides giving the voice to Baloo the bear in the new Jungle Book adaptation by Jon Favreau.

"I started having fun again," confesses the actor. "Everyone is very nice to me, as I am to them, or try to, and everything seems to be falling naturally on its correct place on the board”. He adds that he is feeling lucky. "I don't know of any actor able to make a decent living with his or her art that doesn't feel this way. On the other hand they all feel a somewhat desperate need to be loved. We always strive for approval. I do too, but I try not to show it!" Perfectionism is what kills art, according to Murray. "We have to learn how to be less insecure and less perfectionist," he says. "Relax! When you're on the big screen everyone is already looking up at you. I learned how to be less paranoid: that's when I started feeling lucky and I decided I wanted to work more. I love this job. When I turned 60 I finally understood what I wanted to be as a grown man."

That apparently does not involve a return engagement in a Ghostbusters revival/reunion film that many fans have hoped for. "Come on, it would be pathetic. It's better to leave certain things alone and let them age like a good red wine. Change the cork, at the most, but nothing more!"

Murray reflects on his character, Vincent, in his last movie, a professional drinker. "I'm nothing like that," he offered with a wink during a press conference with the members of the Hollywood Foreign Press in Toronto, after the premiere of St. Vincent. "I’m not an alcoholic, though I like a drink here and there. I drink quietly with no frenzy. Yesterday I had a couple of mojitos at Ivan Reitman’s restaurant, the Montecito. I felt smarter afterword: I suggest you all give it a try."