by Mario Amaya January 8, 2015
Share on FacebookShare on TwitterShare on PinterestCopy URL 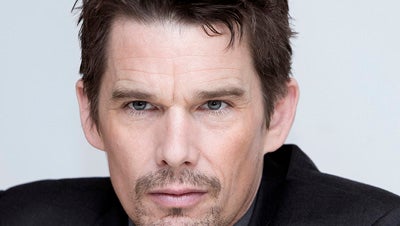 Which actor can go from Dead Poets Society to Reality Bites, and then morph into such diverse characters as those in Before Sunrise and Boyhood? The answer is simple: Ethan Hawke, one of those artists whose persona blends perfectly in every film he has starred in.

The Austin, Texas-born artist started his career as a young promising actor, and has certainly become an accomplished one. Hawke is a frequent collaborator of director Richard Linklater having worked with the fellow Texan in Through a Skanner Darkly as well as the trilogy of Before Sunrise, Before Sunset and Before Midnight, alongside Julia Delpy. It is no coincidence then that Linklater turned to him once again for Boyhood, the film that has been one of the year’s sensations and has made film history with its real-time-life shoot. Following his cast over a 12-year span Linklater paints the coming-of-age story of young Mason (Ellar Coltrane) and his family that is ineffably both lyrical and mundane and in the process speaks poignantly and universally about growing up. Hawke plays Mason Sr. the boys divorced but not estranged father. With the passing of time the character experiences his own arc from bohemian and immature dreamer to a measure of maturity built on the failed relationships and struggles that characterize ordinary living.

With this character Ethan Hawke reminds us of other great work he’s done on the big screen, in movies like Reality Bites, playing the bad boy, or in 2001 next to Denzel Washington in Training Day, as the rookie cop helping to bring him mainstream attention along with substantial critical acclaim. With that film Hawke earned his share of recognition including his first Academy Award nomination, for Best Supporting Actor. Washington won the Oscar for the film in the Best Actor category in 2002.

But Hawke has been an atypical actor in the sense that stardom is not something he has pursued, his real interest has been the love of filmmaking. “You know, ever since I turned 40 I’ve been asking myself a lot of questions.” Says the 43 year-old actor, “I’ve been doing this since I was thirteen and I feel I’ve made a handful of pretty good movies. It’s very difficult to make a good film, very difficult. So many things need to happen right. It’s possible to make a good film in Hollywood; it’s harder to make a film that can last any amount of time. But it really all depends on what your inner goal is, you know?”

Besides acting, Hawke has also directed short films and music videos, like Stay for friend Lisa Loeb in the late nineties. He then turned his attention to features. Joining the ranks of those directors intrigued by digital video at the time, Hawke directed Chelsea Walls, shot in 1999 – an independently made ensemble drama about five struggling artists living in the famed Chelsea Hotel, based on the Dylan Thomas poem Under Milkwood and starring Uma Thurman. He also earned a 2014 Oscar nomination for Before Midnight (2013) in the category of best adapted screenplay. He shares the nomination with actress, screenwriter and co-star Julie Delpy. Now, having co-starred in the 2014 acclaimed drama Boyhood, Hawke has earned his first Golden Globe nomination of his career.