Stars Rock The Red Carpet At The HFPA/InStyle Toronto Party

by Margaret Gardiner September 13, 2015
Share on FacebookShare on TwitterShare on PinterestCopy URL 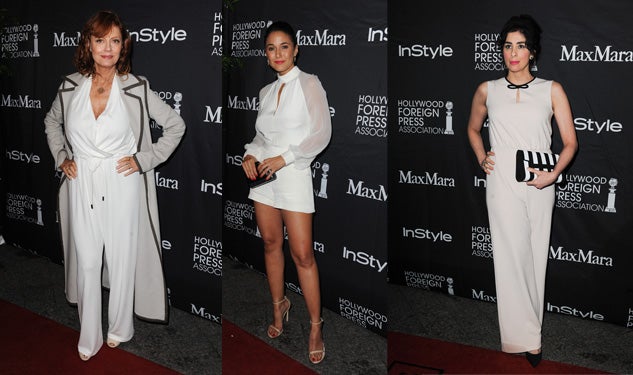 The In-style/HFPA party is one of the highlights of the Toronto Film Festival – and for good reason. The perfect combination of established A-listers and rising talent, plus a smorgasboard of people you know, and people you know you are going to know. The trend
we highlighted as the look of the season dominated; jumpsuits were everywhere, with everyone from Susan Sarandon showing incredible style in a luxe Max Mara to Emmanuelle Chriqui in a short jumpsuit showing the versatility of the trend. Everyone agrees that they choose the style for its comfort but are challenged when it comes to a visit to the ladies room. Think about it. Ms. Sarandon said she was a huge fan of the style the first time it became popular. Sarah Silverman, pointed out the challenge of wearing a jumpsuit. “Everyone’s body length is different and you have to find one that fits just right.” It looked like she had in a Max Mara number.

Photo credit: George Pimentel Photography/HFPA   Eddie Redmayne in Ralph Lauren was a delight with his lovely wife Hannah Bagshawe
in an embroidered fitted gown that was both delicate and alluring. Patrick Stewart shared that he deliberately dressed down in Rag and Bone jacket and pants teamed with a Paul Smith shirt. He knew all the designers without having to think about it, while Martin Landau pointed out, "I’m wearing a  cashmere jacket, a black tie and a black shirt, so I’m dressed
in black.”

Photo credit: George Pimentel Photography/HFPA Alicia Vikander headed a bevy of young rising women that bodes well for equalizing the disparity between the male dominated opportunities in entertainment. Dressed in Louis Vuitton, she was a fresh and independent – a lot like the characters she’s made indelible in films like The Danish Girl and Ex Machina. Mackenzie Davis, who is a scene stealer in The Martian, wore a Max Mara pencil skirt and fitted top that was understated and elegant.

Photo credit: George Pimentel Photography/HFPA | Photo credit Ruben Nepales/HFPA Others who flaunted tradition successfully were Elizabeth Olsen wearing a bias creation by Juan Carlos Abando, Dior shoes and bag by The Row. She chose the flowing black and white ensemble “because of the sheer comfort factor.” Dakota Johnson seems to glide in joy and the feeling is catchy, everyone in her vicinity immediately starts smiling. She wore Christopher Kane.

Photo credit: George Pimentel Photography/HFPA   There was a healthy TV representation too. Christian Slater from USA’s summer hit series, Mr. Robot, wore John Varvados – “head to toe.” Patrick J. Adams in a Ralph Lauren jacket and Armani shirt finished off the designer look with motorcycle boots to add a bit of fun. His co-star in the hit series Suits, Sarah Rafferty wore a Valentino dress with Louise Vuitton shoes. When is this woman going to get her own series. She’s funny, talented and beautiful.

Photo credit: George Pimentel Photography/HFPA The men were not under represented. The King of Cool, Idris Elba, had women swooning in Burberry and Louis Vuitton. “I was having dinner and realized I didn’t have enough time to change before I came over here.” He explained his casual attire, still managing to look dead elegant. Black Mass co-star Joel Edgerton not only knew what he was wearing but how to spell it: “Reiss with two ’s’s’ and Todd Schnieder with two D’s.” He explained patiently – not that either designer needed the help.   Like Cinderella, come midnight my coach was leaving, and I had to take off as a stream of actors continues to pour into the Windsor Arms Hotel, and given the buzz inside, I could understand why. Margaret Gardiner 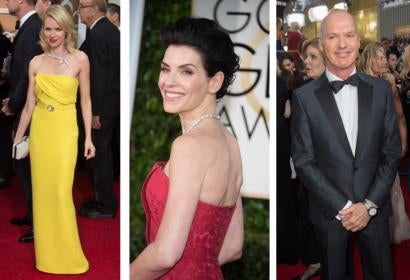 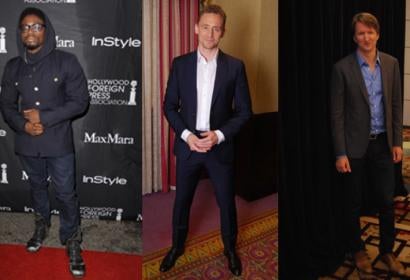 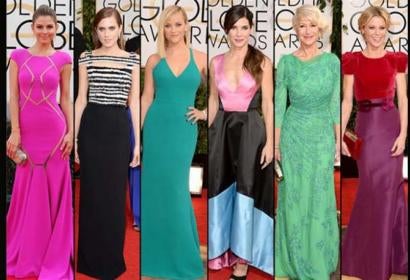