History of the Golden Globes The first awards presentation for distinguished achievements in the film industry granted by Hollywood Foreign Correspondents Association - the precursor of today's Hollywood Foreign Press Association - took place in early 1944 with an informal ceremony at 20th Century Fox. There, Jennifer Jones was awarded Best Actress honors for The Song of Bernadette, which also won for Best Film, while Paul Lukas took home Best Actor laurels for Watch on the Rhine. Awards were presented in the form of scrolls.

The following year, the members of the association held a contest to find a design for a statuette that would best represent the overall aims of the organization. Marina Cisternas, president of the group in 1945-46, presented the idea of a shiny globe on a cylindrical pedestal, to represent the world.

In conjunction with the Golden Globes presentation, the Hollywood Foreign Correspondents Association held its first gala social event in 1945 with a formal banquet at the Beverly Hills Hotel. Going My Way won for Best Picture, while Ingrid Bergman and Alexander Knox were named Best Actress and Best Actor for their performances in The Bells of St. Mary and President Wilson, respectively.

There have been other important landmarks in the history of the Golden Globes. In 1951 the association decided to divide the best film, actor and actress nominees into two categories -- drama, and musical or comedy -- so that no genre would be slighted. In 1952, the HFPA created the Cecil B. deMille Award to recognize “outstanding contribution to the entertainment field.” The award’s first recipient was deMille himself. 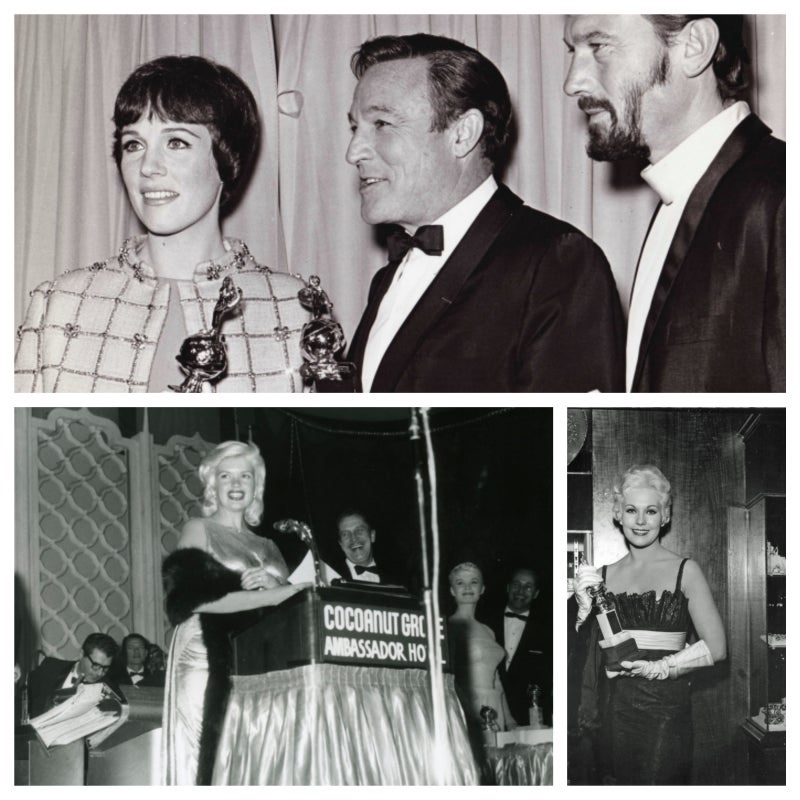 Other unique awards that have been discontinued over the years were the World Film Favorite, from 1951 to 1980 and the Newcomer Award, which had several different names during its lifespan from 1948 to 1983. Timothy Hutton, Bette Midler, and Diana Ross were among the distinguished Newcomers, and Steve McQueen, Doris Day and Barbra Streisand were some of the World Film Favorites.

In 1952 the Association created the Cecil B. deMille award to honor excellence in film. DeMille was the first recipient of the award that bears his name.

In 1956 the Golden Globes included some unique categories: the Trailblazer Award to Walt Disney (American story-telling), Dinah Shore (American song), Lucille Ball and Desi Arnaz (American comedy). The latter paved the way for the inclusion of television categories alongside motion pictures, a tradition that remains to this day.

The current Foreign Language category has its roots in the Samuel Goldwyn International award which distinguished non-US pictures from 1959 to 1964 - Greece's Never on Sunday, Germany's The Mark and Italy's Divorce, Italian Style were some of the recipients of the Samuel Goldwyn Award.

Some categories, however, did not make it to present day's Globes. From 1948 to 1963 the Globes recognized achievements in cinematography. From 1951 on separate cinematography Globes were awarded to black and white and color pictures. The Longest Day, High Noon and On The Waterfront received the former, while Quo Vadis, Lawrence of Arabia and Brigadoon were among the winner in the color category. Another category that was briefly active was the Golden Globe for Best Documentary, presented from 1973 to 1977 - Elvis on Tour and Walls of Fire were the two winners in 1973.

In 2007 a new category was introduced: Best Animated Feature Film. The first year's nominees were Cars, Happy Feet, and Monster House, with Pixar's Cars taking the Globe. In 2018, the Carol Burnett Award was created to honor excellence in television - Carol Burnett was the recipient of the first award, in January 2019.