by Silvia Bizio January 2, 2015
Share on FacebookShare on TwitterShare on PinterestCopy URL 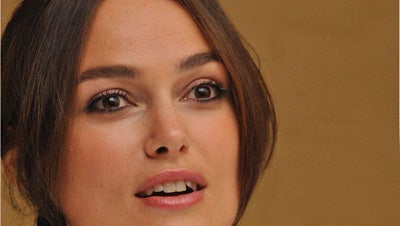 It's always fun getting together with Londoner Keira Knightley, the vivacious, gorgeous 29 year-old actress, so young and already an old acquaintance of ours. She first appeared on the scene in 2002, with her role in Bend It Like Beckham, which led to acclaimed films like Pride & Prejudice (2005 – her first Golden Globe nomination as best actress), Atonement (2007, a second Globe nomination), of course the hugely popular Pirates of the Caribbean series and now The Imitation Game (her third Golden nod), in which she plays the math genius Joan Clarke, who helps Alan Turing (Benedict Cumberbatch) break the Nazi's Enigma code during WWII.

Knightley is friendly, good-humored and as they say in Britain, she's chatty. She's known for thoroughly researching her roles; always looking for something interesting, out of the box. Ask her any questions and she'll give you real and thoughtful answers, not just sound bytes. "The Imitation Game gave me the opportunity to study a certain period in history, the science of it and mainly the humanity of it," she says. "Joan and Alan are like lovers, only platonic ones, since he's a homosexual. Joan, to me, represents an unknowing feminist woman, who gets to get into the room to do the job she was qualified to do, though being paid a fraction of men. I think feminism has come a long way since the 40s and 50s, but it's a never ending process, still evolving."

As for Knightley herself, she’s also evolving quite well: born into a family of actors and writers, she started acting very young and never stopped. Everything seems to come easy to her: she works hard but doesn't overly complicate things. She was seen last year in Jack Ryan: The Recruit, the comedy Laggies and the feel-good Begin Again. She will next appear in the adventurous Everest (the chronicle of a tragic day and night on the peak in May 1996) in which she plays Jan Hall, the wife of mountain guide Rob Hall who perished on the mountain, with many others.

Indefatigable as she is, Keira had time to get married last year, with James Righton, of the British rock-band Klaxons, in a closely guarded ceremony in Southern France. She was always jealous of her privacy and has never given an inch to gossip, all the while keeping her impeccable manners with the press.

Going back to her Joan Clarke in The Imitation Game, she says: "Joan is a fascinating character. Not only did she have to fight every kind of stereotype on a professional level, but she also went against her family's wishes. Her parents disapproved of her passion for mathematics because in the 1940s a young English lady was supposed to marry, not work. Turing proposed marriage to her, despite his sexual orientation, to try to keep her at Bletchley Park, the lab where they worked on the code-breaking machine. A truly enlightening tale of determination and emancipation."

Did she have to fight her family to become an actress? "Not at all," she says. "We are a family of artists: they know very well the vagaries of this trade, and yet they know that when there is passion, and maybe some natural talent, there's no way to stop it. They were never in it for the money, nor was I, though I got lucky here and there. I don't have a sense of business. If I had it I would do more Pirates movies and less smaller, independent work, as I hope you noticed," she adds smiling, with those magnetic brown eyes amicably locking yours.

Keira confesses she loves going to the Golden Globe awards. "It's so much fun, also because I get to see all the people I worked with: I will sit with my dear friend Benedict Cumberbatch and we'll have a blast. Dress? I didn't think about it yet. But I love fashion and I'm very good friends with Stella McCartney. I guess she'll think up something for me. She always does."