by Meher Tatna January 6, 2015
Share on FacebookShare on TwitterShare on PinterestCopy URL 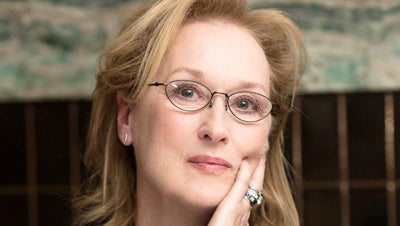 Meryl Streep may have given one of the best performances ever put on film as Sophie in Sophie’s Choice, one that cemented her place in cinema history, yet it was only the second leading role of her illustrious career.

The peerless Meryl who has been nominated 29 times for a Golden Globe and keeps beating her own record for these nominations (she has won eight times, another record), is the Hollywood Foreign Press Association’s choice for the Cecil B. deMille honor for our next show on January 8, 2017, celebrating a career that will probably never be equaled.

This year the ever-busy actress plays Florence Foster Jenkins, a socialite in 1940’s New York who was the world’s worst singer, but who somehow believed she had the talent to sing opera.  The voice she heard in her head was flawless even though everyone else thought it was terrible.  The charming story of this clueless yet heroic woman’s joyous determination to perform at Carnegie Hall is chronicled in the movie of the same name.  Hugh Grant plays her devoted and much-younger husband.  Stephen Frears (The Queen) directs.

Streep explains her process of creating characters in one of so many press conferences with the HFPA. “I have just a real interest in people. I just want to know what makes that person. What it’s like to be them from the inside out, because I know how it looks but I want to know how it feels. Generally when you investigate what it’s like to be somebody that people have strong opinions about, you find that there are little mysteries and little anomalies and little contradictions that are quite, quite humanizing. Understanding people in their three dimensions -- yeah, that’s my interest in acting.”

Another talent in Streep’s arsenal is her ability to flawlessly create accents for her characters. And it always baffles her to be asked if the accents help her with the character. “How could I play the part and talk like me?” she told us. There is the Polish one for the aforementioned Sophie’s Choice; a British one for The Iron Lady, Plenty and The French Lieutenant’s Woman; Danish for Out of Africa; Irish for Dancing at Lughnasa; Australian for A Cry in the Dark; Italian for The Bridges of Madison County; and a Minnesota accent for A Prairie Home Companion.

And the lady can sing. As she did in Mamma Mia, the film that made the actress a movie star, and in A Prairie Home Companion as a country music singer, and in Postcards from the Edge where she bursts into exuberant song in the last scene.

When asked what winning a Globe meant to her, Streep said, “The first time it meant to me that I had reached an international audience. That’s something that’s very, very hard to come to terms with. Over the years I have understood it better but it still shocks me to walk into, you know, a place in Zagreb and be recognized. I’m still just so surprised – I mean I understand America, but to go around the world . . . . And that’s what the Golden Globe sort of represents is that an international community knows your work and it’s very overwhelming. It’s an overwhelming feeling but it’s very thrilling too to win an award, but it’s also terrifying because then I have to come and wear a dress and be photographed and all the things I love.”