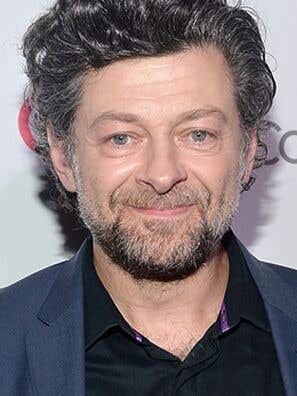 Andy Serkis (born Andrew Clement G. Serkis in London, England, on April 20, 1964) is widely known for his work in performance capture roles such as Gollum in Peter Jackson's The Lord of the Rings (starting in 2001) and The Hobbit film series, the giant gorilla in King Kong (2005) and Ceasar in The Planet of the Apes and its sequel (2011 and 2014). He's commonly referred to in the entertainment community as the “human simian” for his extraordinary mimic abilities to reproduce a monkey's movement. Serkis also played Captain Haddock in Steven Spielberg's The Adventure of Tintin (2011) and earned a Golden Globe nomination for his portrayal of a serial killer in the Britsh TV film Longford (2006).

Serkis started his acting career in the theater, playing many Shakespeare's characters with the Royal Court Theater, and then went on to TV and film. He is featured in the TV series Finney (1994), The Jump (1998) and in the miniseries Oliver Twist (1999).

Serkis was cast as the “motion capture digital avatar” of Gollum for The Lord of the Rings: The Fellowship of the Ring (2001), which marked his international success as an actor. Serkis played the role of King Kong in 2005, Alley in The Prestige (2006), Albert Einstein in the TV movie Einstein and Eddington (2008), and Ulysses Klaue in Avengers: Age of Ultron (2015), followed by Black Panther (2018). Among his many recent credits are the TV miniseries A Christmas Carol (2019) and The Letter for the King (2020) and played the role of Alfred in The Batman (2022).