David Bowie (born David Jones in London, England, January 8, 1947, died January 10, 2016), an influential singer-songwriter with several musical albums to his credit, acted in movies like The Man Who Fell to Earth (1976) by Nicolas Roeg, The Hunger (1983) by Tony Scott with Catherine Deneuve and Susan Sarandon, Labyrinth (1986) by Jim Henson. He played Pontius Pilate in The Last Temptation of Christ (1988) by Martin Scorsese with Willem Dafoe, Andy Warhol in Basquiat (1996) by Julian Schnabel with Jeffrey Wright, Nikola Tesla in The Prestige (2006) by Christopher Nolan with Hugh Jackman. He wrote the lyrics and performed the song Putting Out the Fire, with music by Giorgio Moroder who also composed the score, for the movie Cat People (1982) by Paul Schrader. 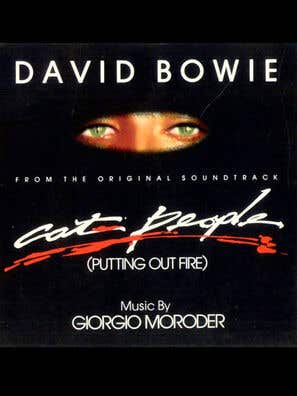