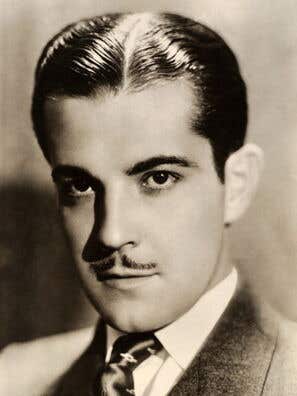 Ramon Novarro was born José Ramón Gil Samaniego on February 6, 1899 in Durango, Mexico, to Leonor (Gavilan) and Dr. Mariano N. Samaniego Siqueiros, a prosperous dentist. Ramon and his family moved to Los Angeles in 1913, as refugees from the Mexican Revolution. After stints as a ballet dancer, piano teacher and singing waiter, he became a film extra in 1917. After five years as an extra, he got his first acting break by director Rex Ingram, in the movie The Prisoner of Zenda (1922). Success followed quickly, and soon Novarro was being called "the new Valentino" in the press.In 1925 he appeared in his most famous role, as the title character in Ben Hur- A Tale of the Christ. After years of hits in silent movies,Novarro adapted quickly to the talkies in the 1930s. Mata Hari, in 1931 - alongside Greta Garbo as the famous spy - was Novarro's last big success. In his later years he worked on stage in New York and had small cameos in movies. On October 30th, 1968, Ramon Novarro was savagely beaten in his North Hollywood home by two young hustlers. They had heard - in error - that he had thousands of dollars locked away somewhere in his home. They never found any money, and Ramon was discovered dead the next day by his servant.