“Emily in Paris”: the Genius of Patricia Field

by Margaret Gardiner October 5, 2020
Share on FacebookShare on TwitterShare on PinterestCopy URL 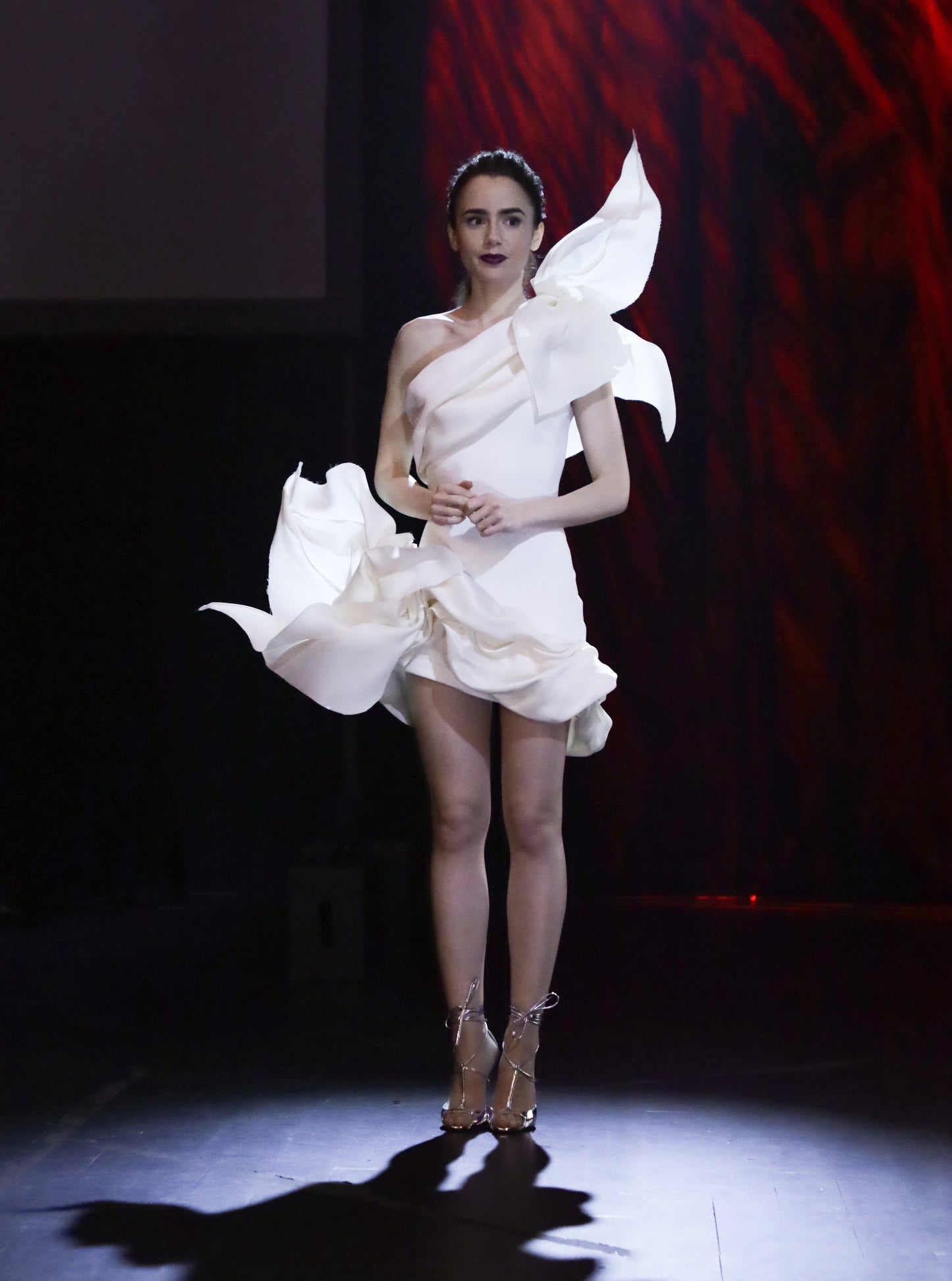 Lily Collins in Emily in Paris (2020) wearing an haute couture creation by Stephanie Rolland Haute Couture, which the designer gifted to Lily after the shoot.

At age 6 costume designer Patricia Field knew her future was entwined with fashion, touting her favorite cowgirl outfit that included “a miniskirt, boots, a hat and a gun in a holster.” Many will look at her subsequent costumes in shows like creator/writer/producer Darren Star’s new Netflix series Emily In Paris, (they also collaborated on Sex and the City), and her work on The Devil Wears Prada and recognize the themes of miniskirts and boots that are de rigueur amongst the fashion-forward today. While always creating unique, ahead-of-the-curve clothes for her characters, Patricia Field admits that her personal flair can be seen on the screen. “There are definite elements of my own style that are reflected in my approach to characters. The one element that remains and is always universal is the mix of unexpected pieces that I employ and, in the end, look interesting and original.”

The native New Yorker’s work has resonated with a generation and influenced our current perception of panache, yet she feels no pressure to reach a projected bar. “It’s dangerous to believe your press.” The line is dropped drolly, explaining her ability to lead the zeitgeist. “My basic style is to mix classics in a way that we haven’t seen. It’s my nature. I just do it without any conscious motivation.”

Emily, (Lily Collins is also a producer on the show) is an ambitious 20-something marketing executive from Chicago, who unexpectedly lands her dream job in Paris when her company acquires a French luxury marketing company – and she is tasked with revamping their social media strategy. Emily’s new life in Paris is filled with intoxicating adventures and surprising challenges as she juggles winning over her work colleagues, making friends, and navigating new romances. While doing so she wears concoctions from some of the most influential designers of the day including Asos, Dior, Givenchy, Jean-Paul Gaultier, Kate Spade, Rag & Bones Louboutin, Stuart Weizmann, and Vivienne Westwood to name just a few. Fashion fans are going to love this show.

Let’s break down the look of the show, which was heavily influenced by the 1951 film, An American in Paris.

Fashion is seen as a young person’s flitting quest for new; but style is forever, and in Emily in Paris, Field creates a blueprint for the mature maven with a libido. 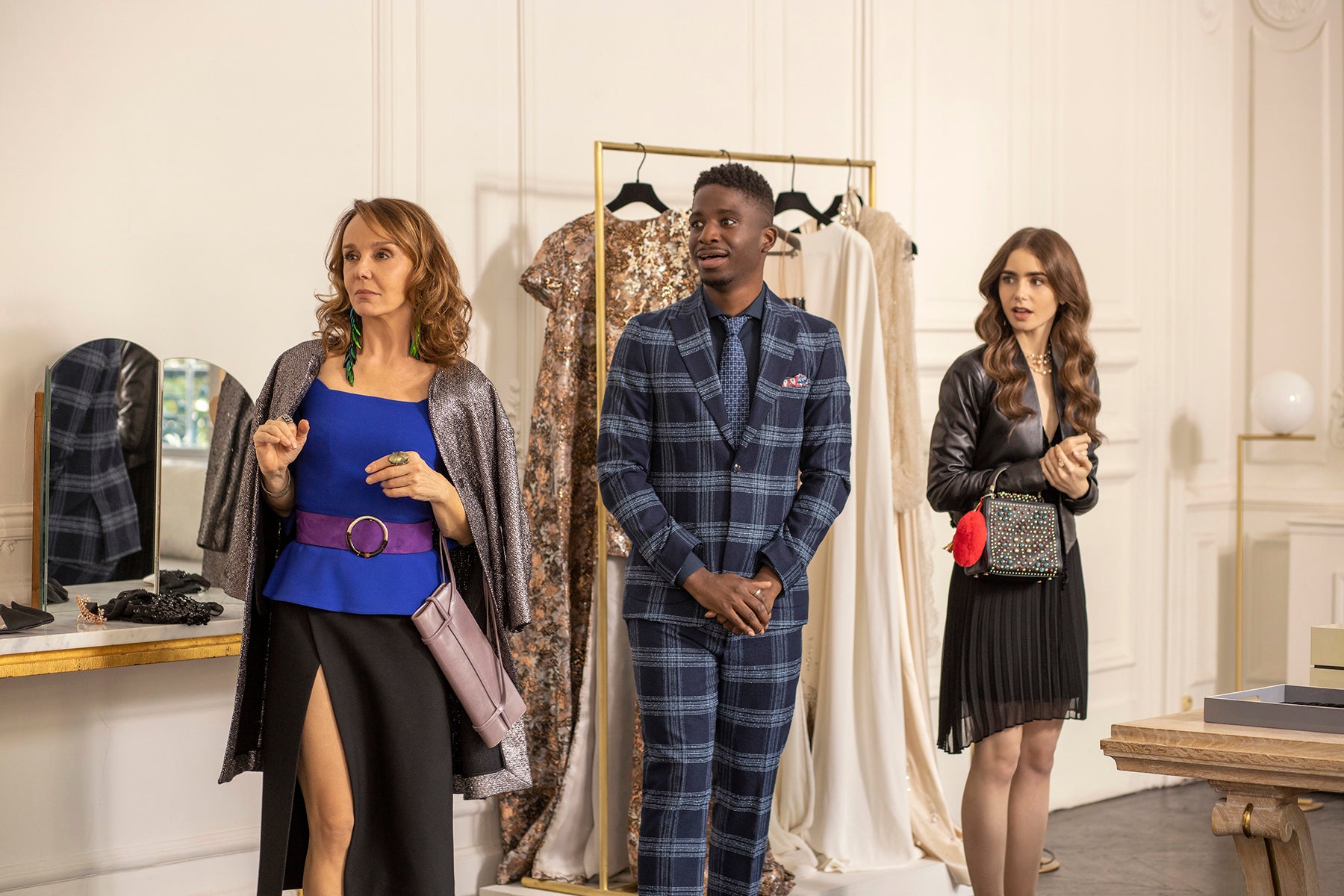 Philippine Leroy-Beaulieu, Samuel Arnold, and Lily Collins in Emily in Paris (2020). Note the distinct characters here. The mature woman. The contrasting patterns and kerchief of the modern man, and the soft outline of the skirt with the skin of Lily’s leather jacket. We see character growth in Emily’s clothing choice.

Philippine Leroy-Beaulieu portrays Sylvie, a mature powerhouse, who is anything but staid. The body is not invisible, it’s just not on display – she is sensual rather than sexy. The woman who headed up her own clothing range: House of Field, describes the look thusly: “Sylvie was the expression of classic French chic. No bright colors, an effortless consciousness that Paris is famous for. Sylvie represented that woman to me.”

“I loved dressing Sam (Samuel Arnold)”, enthuses Patricia, her hair aflame against the purple dress she’s wearing. “His wardrobe was very compatible with the way he expressed himself and his personality. He gave me lots of inspiration. I had to control my excitement in selecting his wardrobe. The confidence of a man always surprises me because it seems to me that the man is not under the same pressure as the woman. For example, on Sex and the City, I offered a pink shirt to a man and he had a hard time accepting it. Of course, I didn’t force it. We met a few years later at a social event, and he told me he has a pink suit. I was very happy to hear it. Knowing when it’s not too much is about developing one’s personal taste and having the confidence to express it.” 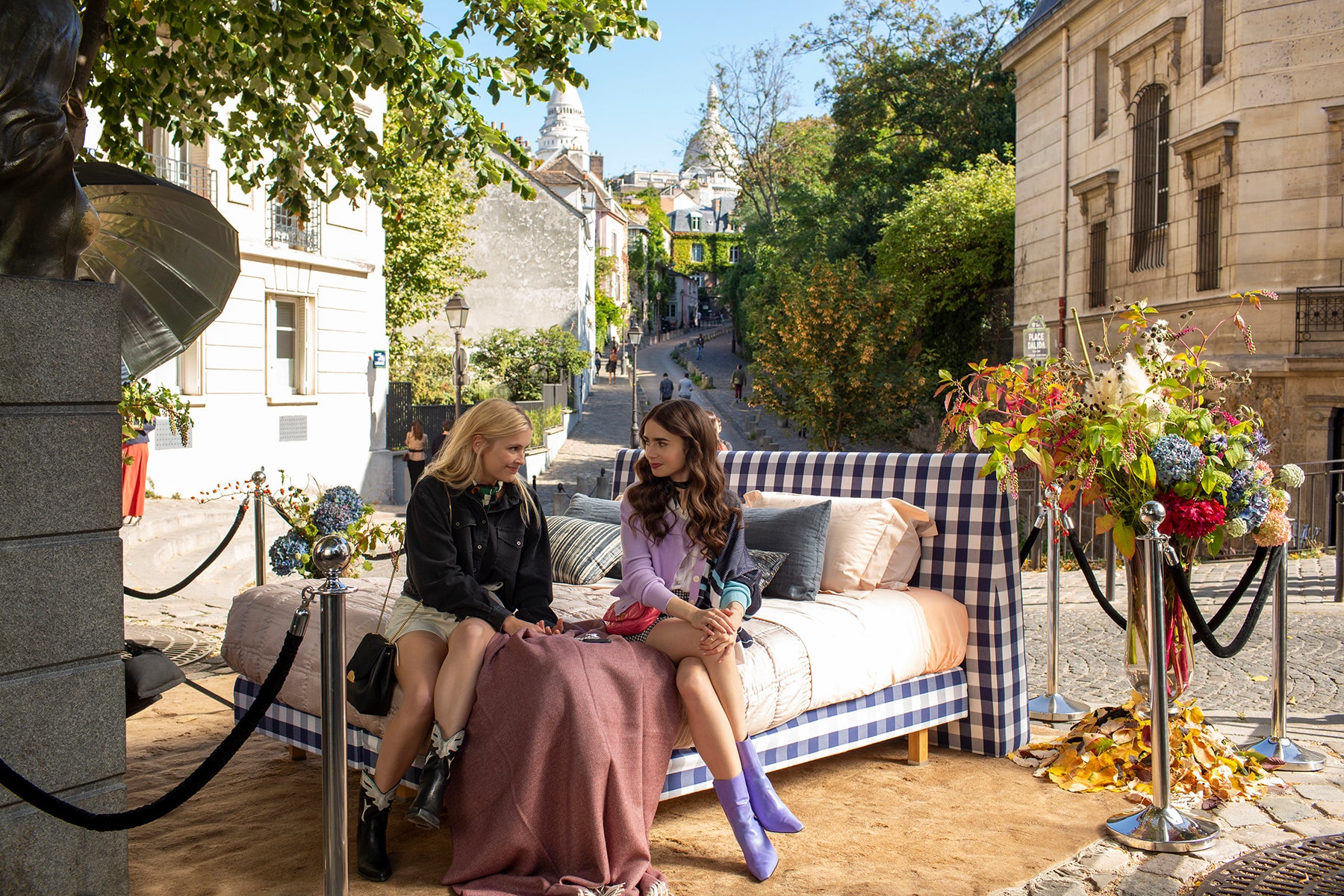 Camille Razat and Lily Collins in Emily in Paris (2020). Note the cowboy boots – possibly a homage to Patricia’s youth.

On the topic of boots Field counsels, “As the age goes up, so does the length of the boot.” Breaking down Emily’s look, she elaborates, “Her style was a representation of her personality: optimistic, young, intelligent and colorful.”

“I’m not a fan of prints in general. I find it difficult to veer off from this formula. There are exceptions – and they are all in the show, which was based on the direction that (Emily) was a midwestern girl who is not so creative. Prints have been a recent trend and I do not find them very interesting. I much prefer to create an original style with solid separates in color combinations that might be unusual, but in the end, look good.” 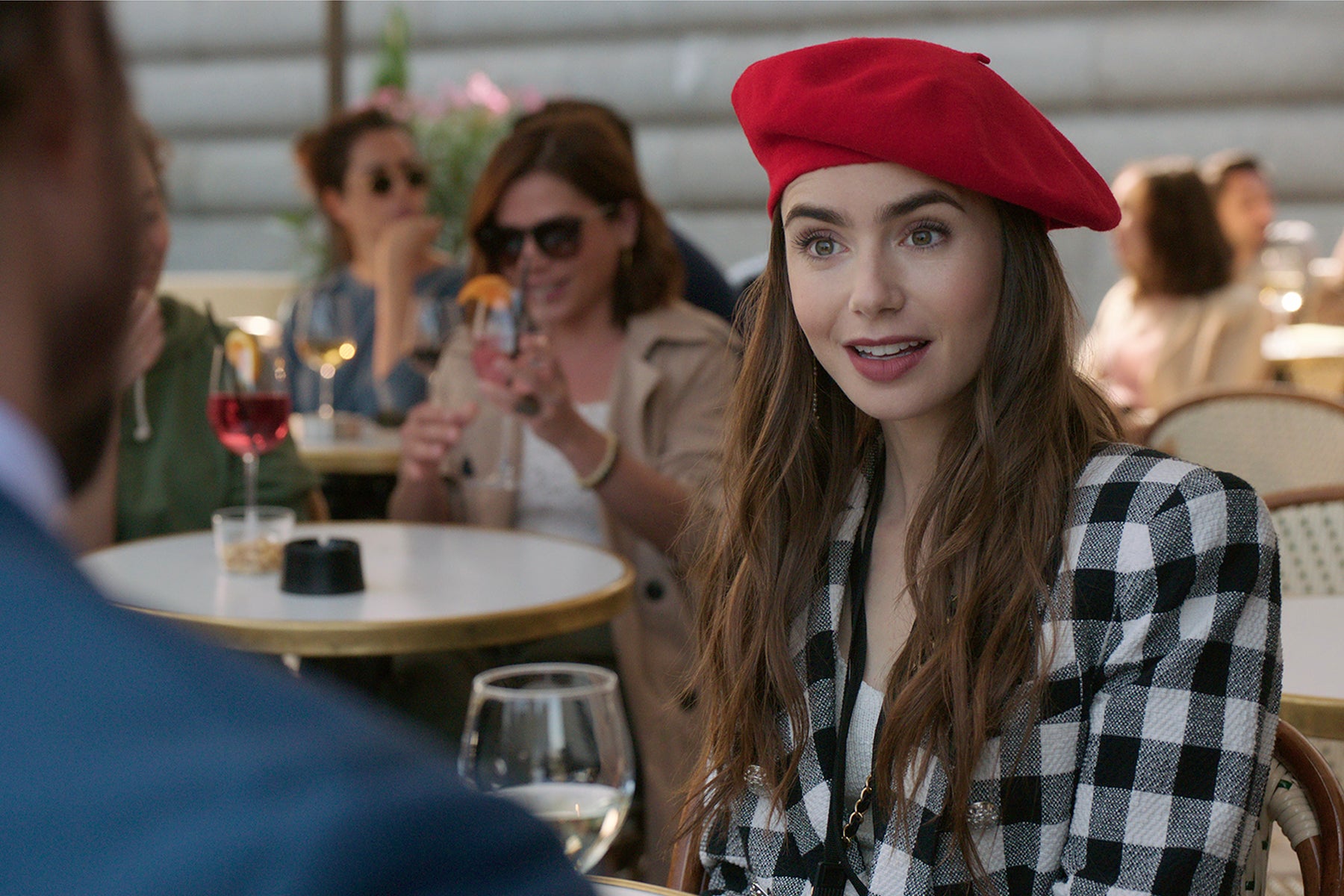 Headgear of all kinds features prominently in the Netflix show, style inspiration for our upcoming winter. While completing a look, it did create a few problems for Field. “Hats sometimes create a problem with the lighting department because brims cast a shadow on the face. Luckily, berets and buckets solved the problem.” 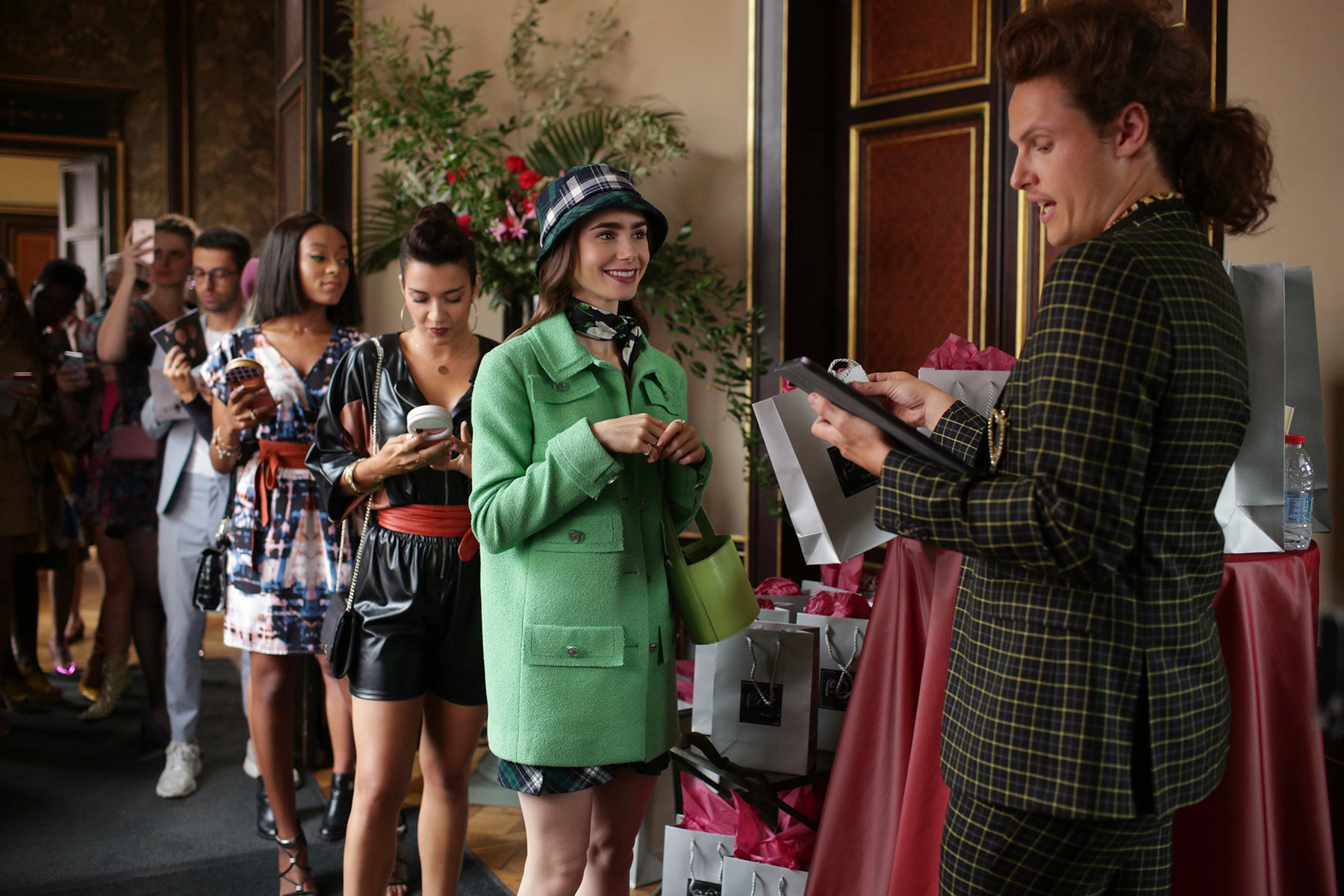 “The green Chanel coat was actually a jacket, but as Lily is so tiny, I thought I would play with the oversized look when it came to Chanel. It is one of my favorite pieces used that way.” Highlighting the true genius of any costume designer – using pieces innovatively. 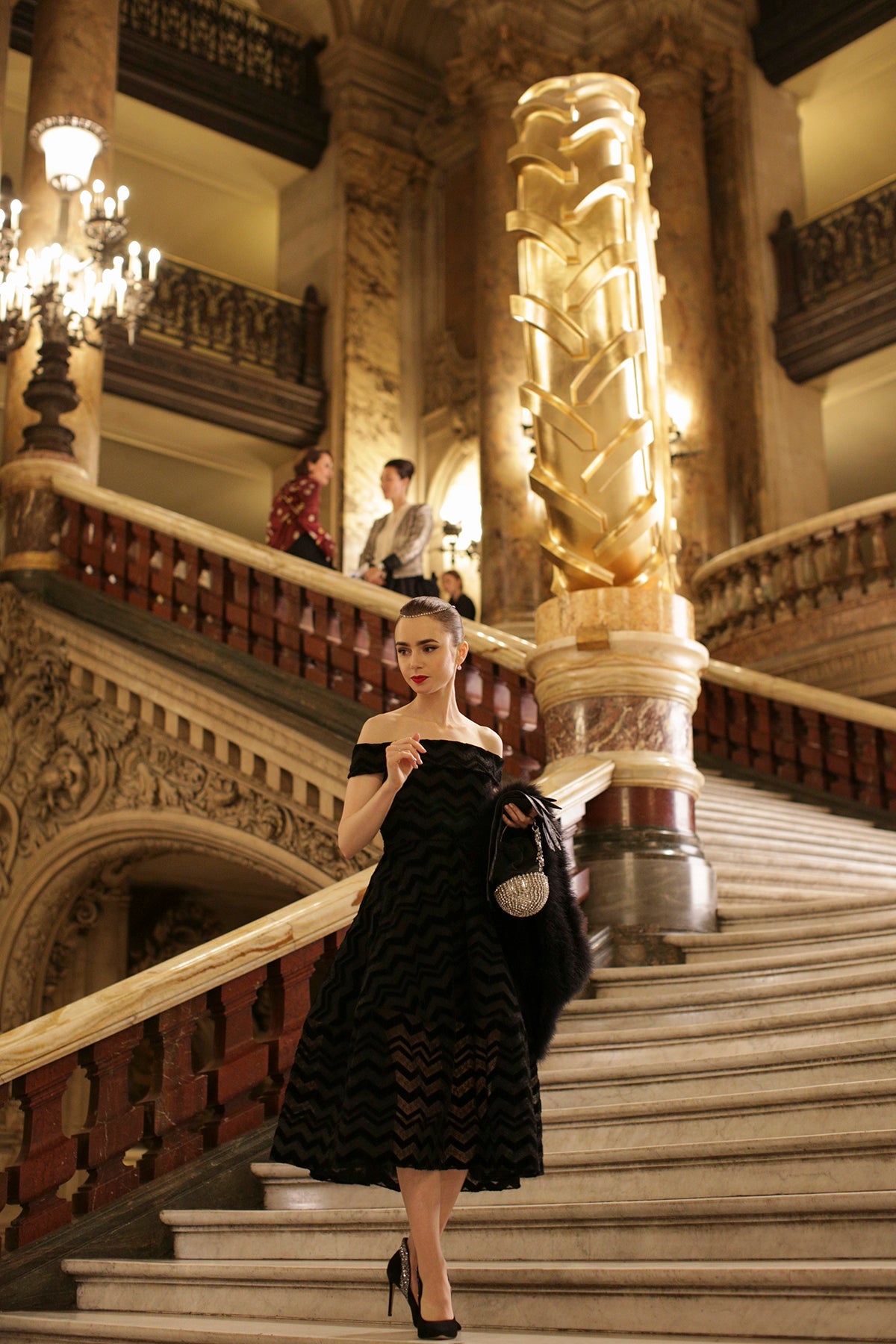 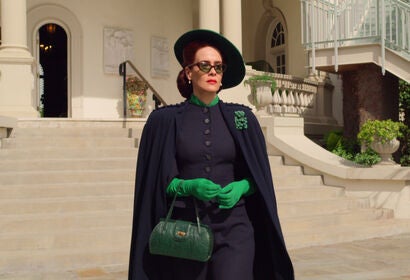 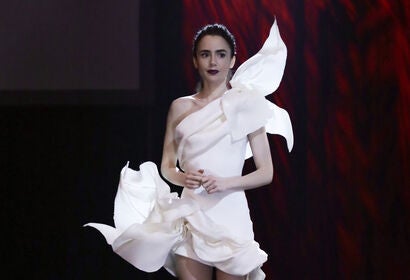 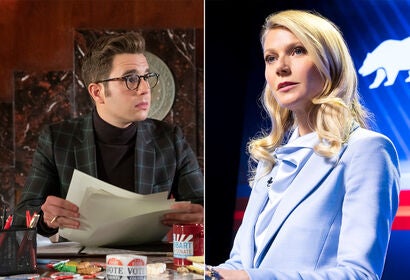