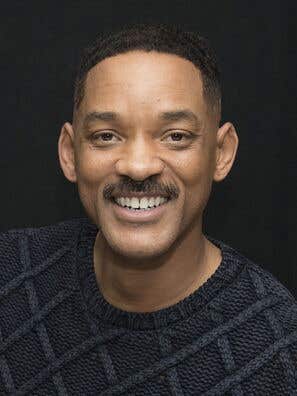 Willard “Will” Smith Jr. (born September 25, 1968 in Philadelphia, Pennsylvania) started his career as a rapper under the name of Fresh Prince, he starred in the TV series The Fresh Prince of Bel Air (1990-1996). He acted in movies like Six Degrees of Separation (1993) by Fred Schepisi, Bad Boys (1995) by Michael Bay, Independence Day (1996) by Roland Emmerich, Enemy of the State (1998) by Tony Scott and Wild Wild West (1999) with Kevin Kline. He starred with Tommy Lee Jones in Men in Black (1997) by Barry Sonnenfeld, and 2 sequels (2002-2012). Smith acted with Matt Damon and Charlize Theron in The Legend of Bagger Vance (2000) directed by Robert Redford, played boxing legend Muhammad Ali in the biopic Ali (2001) directed by Michael Mann, starred in The Pursuit of Happyness (2006) and Seven Pounds (2008) both directed by Gabriele Muccino. He gave a dramatic performance as Doctor Omalu in Concussion (2015). In 2016 he played Deadshot in DC Comics Suicide Squad and an advertising executive dealing with grief in Collateral Beauty by David Frankel with Edward Norton and Kate Winslet. Smith starred in Gemini Man (2019) by Ang Lee, played the father of tennis champions Venus and Serena Williams in King Richard (2021).

Read Will Smith by Elisabeth Sereda.