by Meher Tatna November 9, 2020
Share on FacebookShare on TwitterShare on PinterestCopy URL 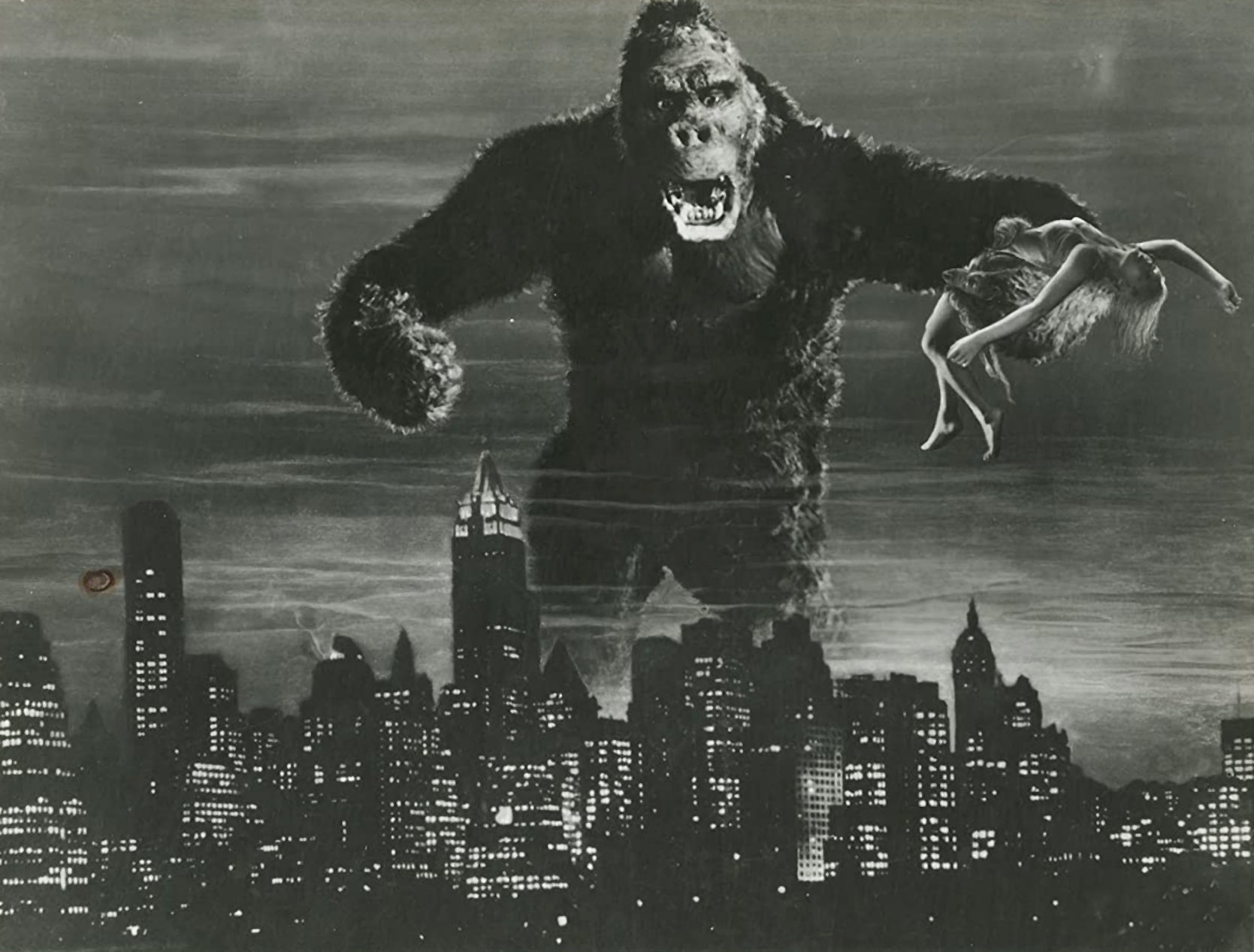 In her autobiography “On the Other Hand,” Fay Wray says when director Merian C. Cooper offered her the role of Ann Darrow in King Kong opposite “the tallest, darkest leading man in Hollywood,” she thought her co-star would be Gary Cooper. Of course, he turned out to be the best-known monster in cinema history, star of the 43rd film on the AFI’s list of the 100 greatest American films ever made and listed with the National Film Registry in 1991.

The film was sold to the public with this tagline: “They said it couldn't be filmed – but it was! See it and ask – what if such a thing could happen?” Most of the posters have a giant Kong clutching a tiny Wray, sometimes with a plane in the other hand. British mystery writer Edgar Wallace’s name is also featured prominently on them – he is billed this way: “from an idea conceived by Edgar Wallace [and, in tiny type,] Merian C. Cooper.”After a four-minute overture by composer Max Steiner, the movie opens with unusual credits. On the title card, only Executive Producer David O. Selznick is named, followed by the co-directors Cooper and Ernest B. Schoedsack. Technical credits follow, given pride of place, followed by every other above-the-line talent except the cast. The cast, listed as “The Players” is next, headed by Wray, all on the same card. King Kong is listed last on his own card as “The Eighth Wonder of the World”, leaving no doubt he is the star of the film. Indeed, “The Eighth Wonder” was one of the working titles of the screenplay.

Jungle films were popular at the time, Tarzan films were the rage, and Cooper and Schoedsack had made a previous animal film in 1927 called Chang: A Drama of the Wilderness about monkeys. At Selznick’s RKO, Cooper made The Most Dangerous Game, another animal picture starring Wray, directed by Schoedsack, and then used those sets to shoot King Kong. Edgar Wallace was hired to write the script with a view to capitalizing on his name. He passed away after turning in a first draft, and a number of other writers, including Schoedsack’s wife, Ruth Rose, finished the shooting script. The budget was allocated as $500,000.

In the film, producer Carl Denham (played by Robert Armstrong) having heard of a monster that lives on an unmarked island, decides to charter a ship to go film it. Being very closemouthed about his plans, he manages to find an impoverished actress, Ann Darrow (Wray), willing to go along with his secret plans on faith. Once the ship arrives on the island, the natives capture Ann to sacrifice her to the giant ape Kong. Kong seizes her and takes her back to his lair. The crew, led by love interest Jack Driscoll (Bruce Cabot) goes to rescue her, losing many in the fight, but Kong is eventually captured and brought back to New York where he escapes and ends up on the Empire State Building with Ann, in one of the most famous scenes in cinema history.

Borrowing the stop-motion animation technology from a scrapped movie called Creation, Cooper hired that picture’s chief technician Willis O’Brien (who gets third billing in the opening credits) to create Kong. Three months of research were devoted to creating the location, fauna and indigenous people of the mythical Skull Island, and models, drawings and illustrations were made studying photos and films of gorillas. Using techniques such as rear projection and the Dunning and Williams Travelling Matte Processes allowed the directors to shoot the foreground and background separately. Previously shot footage was projected onto a cellulose acetate screen and the live-action in front of it was filmed. Wray spent many, many hours sitting in a tree and screaming at the screen. Miniature projection was another technique used in the scenes in which Wray sits in Kong’s hand. The Kong model had rubber skin and muscles built onto a steel frame, which was then covered with latex and fur. An 18-inch model was used for most of the scenes on the island.

A 20-foot head was also created, in which three technicians could sit and manipulate Kong’s ‘expressions’ with levers. A giant foot to crush his victims and a giant hand were also built separately. Wray also spent a whole day of recording screams in a sound studio which she dubbed “the aria of the agonies.”

For her scenes with Kong, Wray was put in the mechanical hand which was raised by a crane ten feet. She explained in her autobiography how those scenes were shot. “The big arm, about six feet long, was attached to a lever so it could be raised or lowered. I would stand on the floor while a grip ... would place the flexible fingers around my waist in a grip secure enough to allow me to be raised to a level in line with an elevated camera. There was a wind machine to give motion to my clothes, and I struggled to give the illusion that Kong was a fearsome forty feet tall.”

Even though the production took eight months with long stretches off for the cast as the producers worked on the special effects, Cooper and Merian shot fast, often with 20-hour filming days. The scene of the islanders’ sacrifice to Kong involving hundreds of extras, flaming torches and tens of crew, shot on a Culver City backlot, was done in one night. The wall on the island separating the village from the jungle set was repurposed from Cecil B. deMille’s 1927 King of Kings. The gate was reused from D.W. Griffith’s 1916 Intolerance.

The theater scene where Kong is displayed to the New York audience was shot at the Shrine Auditorium in downtown Los Angeles, and the Empire State Building’s spire was replicated at the RKO lot for the final scene, using plane models that “shot” at Kong, and then cutting in footage of actual planes. Kong’s roars were lion and tiger roars recorded at a zoo and then played backward in slow motion. The film went $270,000 over budget. Wray made $10,000 for ten weeks’ work.

Cooper paid Max Steiner $50,000 out of his own pocket to compose an original score for the film with a 46-piece orchestra, one of the first films to do so. Till then, movies used background music for scores. The score was recorded on three tracks for sound effects, music and dialogue. Steiner would go on to a successful career writing scores for movies such as Casablanca (1942) and Now, Voyager (1942). His use in the score of themes for characters in the films was also innovative.

The picture opened at Radio City Music Hall and the Roxy Theater in New York City simultaneously, and 50,000 people saw it on the first day. There were ten shows daily. In Los Angeles, it premiered at Grauman’s Chinese Theater with the Kong head displayed in the lobby. King Kong saved RKO which had gone into receivership on the day of its New York premiere. That weekend’s grosses alone, just in NYC, were $90,000, and RKO earned $1,761,000 in its initial year of release. A sequel, The Son of Kong, was released that same year.

King Kong is a pre-Code movie, released in 1933 one year before the restrictions of the Hays Code went into effect. For subsequent releases of the film, starting with the one in 1938, several scenes were censored. One was when Kong peels off Ann’s clothes, another was when he bites off a woman’s head and stomps a villager into the ground, and yet another was grabbing a woman from a hotel room and throwing her when he realizes she’s not Ann. Another was a scene where men thrown down a ravine by Kong were eaten by giant spiders. (Most of these edits were eventually restored in 1971 except for the last one. We know that one existed from photographs.) The film was even colorized in 1988.

The film was restored in collaboration with Warner Bros. with additional funding provided by the Hollywood Foreign Press Association and The Film Foundation. WB had the surviving elements on hand – a dupe negative from an RKO studio print. The print was scanned at 4K resolution on a Northlight scanner at Warner Bros. Motion Picture Imaging. Restoration and color correction was completed at 2K resolution.

In 1983, on the 50th anniversary of the film, a New York theater held a Fay Wray scream-a-thon contest in its lobby. And in 2004, the lights of the Empire State Building were dimmed for 15 minutes in honor of Wray’s passing. 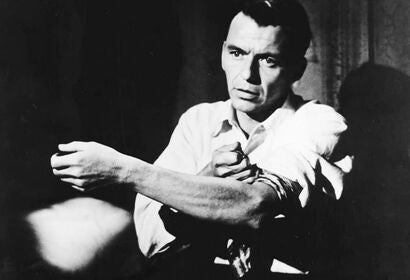 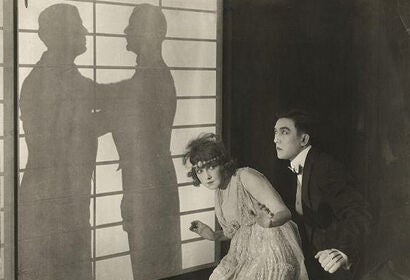 Golden Globe Awards
Oral History: Stanley Tucci on How We Relate to One Another
November 9, 2020
Interviews
Noah Huntley:"There's a big distinction between aloneness and loneliness"
November 9, 2020