by Lorenzo Soria December 31, 2018
Share on FacebookShare on TwitterShare on PinterestCopy URL 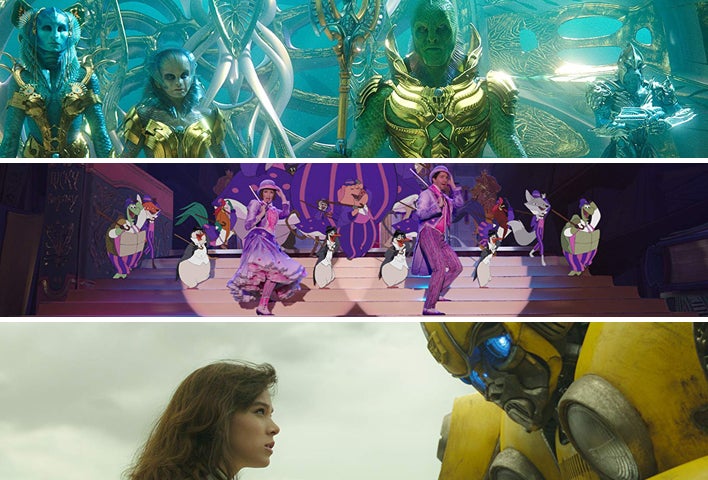 With the long holiday season coming to end, Aquaman succeeded in hanging onto the global top spot for $136 million this frame, to reach a worldwide cume of $748.8 million. Jason Momoa's turn as the lord of the deep is now the second highest grossing film ever for Warner's DC Universe behind The Dark Knight Rises' billion-dollar run in 2012. China is the film's biggest market at this point with $260 million, after adding $11.6 million and returning to second place on the Middle Kingdom chart this weekend. Sales in the US meanwhile hit $188.8 million after a $55.1 million frame that saw it drop just 24% from its first three-day weekend outing. European numbers are strong as well. Aquaman has hit $15.3 million in France and $12.3 million in Germany, beating its opening numbers by 13% and 16% in these two countries.

The competition will remain about the same in the US, with no particularly big movies opening in the first two frames of the new year. Chinese waters will, however, become more crowded when Bumblebee, a spin-off of the Transformers series that has done very well there so far, opens this week.

Bumblebee stayed in third place during its sophomore outing in the US and notched $20.5 million in domestic sales. The Paramount spin-off had a lower profile release than previous Transformers films and was shot on a series low budget of around $100 million. Nike Scion and Laika Films founder Travis Knight took the reins from Michael Bay, who directed the previous five films, as the studio hoped to add a more human touch to this picture. It's made $90 million overseas so far, with $45 million coming from this past frame. Its biggest overseas market so far is South Korea where it generated $7.8 million. Next is Mexico with $7.5 million, followed by Russia at $5.7 million and Australia at $4.8 million. Overall global sales sit at $156.7 million after two frames, and Paramount will be looking East to find this film's fortune. Bumblebee doesn't feature Chinese actors or locations like the last couple of Transformers movies, but it was produced in partnership with Tencent Pictures and will benefit from their vast marketing and distribution network. Previous Tencent co-productions like Warcraft and Kong: Skull Island that didn't have any overt connection to Chinese culture made more money in the Middle Kingdom than in the US and this film could well follow suit.

While Paramount will be looking overseas for their last wins of the year, Disney can turn their eyes back home after Mary Poppins Returns shot up 19% from its relatively disappointing start last frame, to finish its second turn at the US box office in second place with $28.1 million. Local sales are now at $98.9 million, while international receipts hit $74.4 million. Its major foreign market is the UK, where the story is set, and it has grossed $28.9 million. Disney's classic family-friendly films can often over-perform in Italy, and this one certainly has. It's made a locally huge $11.2 million there in two frames. Poppins opens in Australia and Russia next week and Japan on the first of February.

Next week's biggest opening at home is Escape Room, a horror movie from Sony.