by Yoram Kahana January 26, 2017
Share on FacebookShare on TwitterShare on PinterestCopy URL 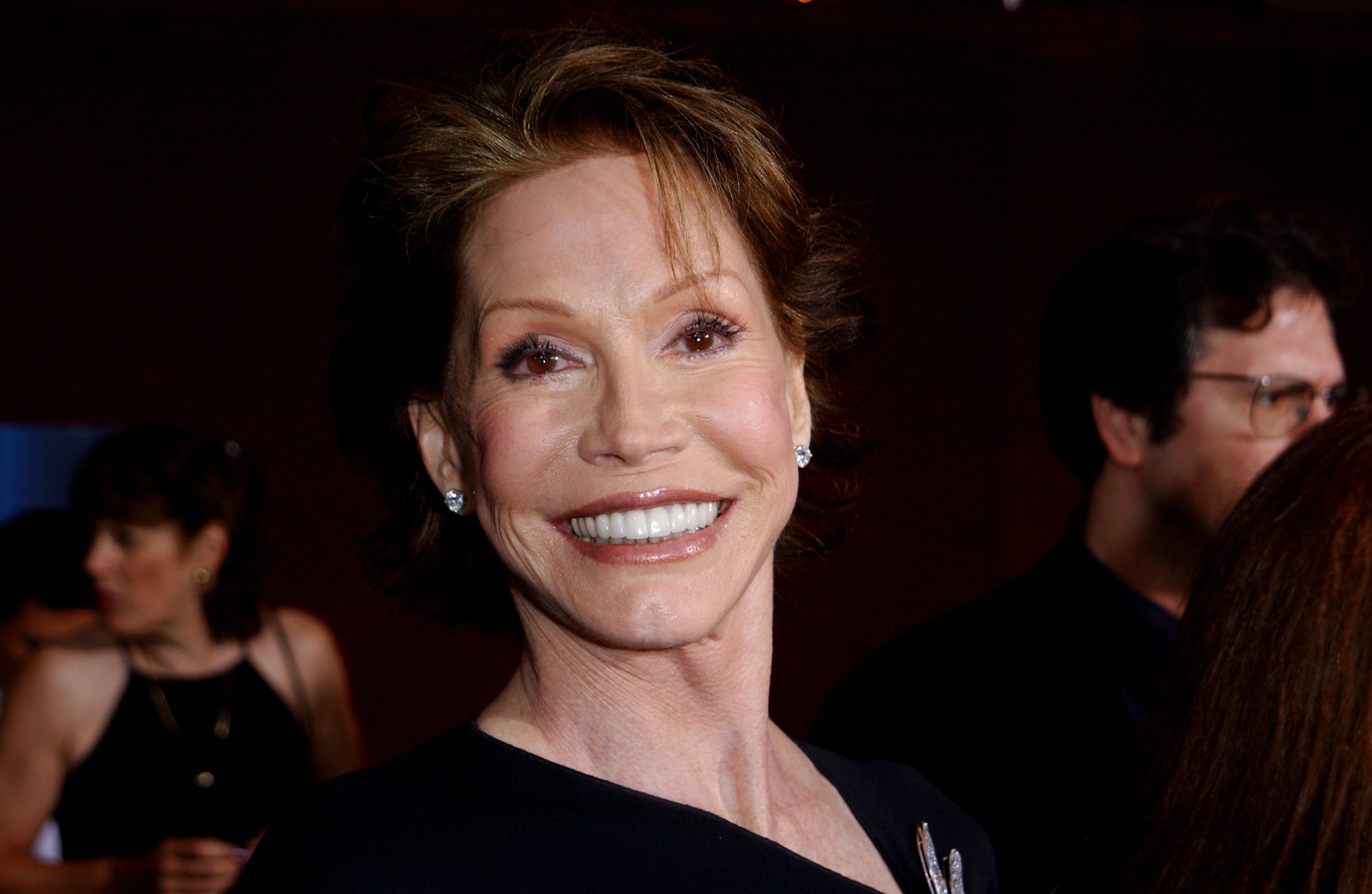 Mary Tyler Moore (December 29, 1936 – January 25, 2017) first captured the hearts of the Hollywood Foreign Press Association in 1965.  A year earlier the Dick Van Dyke Show had won the Globe for Best TV Show-Comedy. Moore earned her first Globe for Best TV Star- Female (as the category was named at the time) for co-starring with Van Dyke.  Six years later Moore was the star of her own show, The Mary Tyler Moore Show. It ran for seven seasons, and was nominated for Globes every year but the last. Moore won for the first season, 1971, and was nominated every year through the last season, 1977. The HFPA nominated the show 23 times, and twice gave the Globe to Moore's co-star, Ed Asner.

The HFPA was not alone. Viewers fell in love with Moore's Mary Richards, a single career woman, who captured the zeitgeist of the 1970s, with her fresh and witty representation of an emerging, new image of women in America- freer and more assertive than in the 1950s. Women who were now active, successful, competitive- but also frustrated and disheartened at times.

Moore's character's interaction in the office with coworkers and gruff boss Asner, her integrity, empathy and sense of humor were the answer to the public's anxiety about women becoming a growing segment of the American workforce. "That character also happened to be single, female, over 30, professional, independent, and not particularly obsessed with getting married," wrote one TV scholar." Mary had America facing such issues as equal pay, birth control, and sexual independence way back in the ’70s.”

Moore influenced and inspired working women, including actresses who followed her. Tina Fey, twice host of the Golden Globes awards ceremony and creator and star of the multi-nominated and three-time Golden Globe winner 30 Rock, has said that watching Moore's show inspired her as she developed her sitcom and her character, TV writer Liz Lemon.

Moore's first show was markedly different. She was Laura Petrie, the stylish wife of Dick Van Dyke's comedy writer on his eponymous show that ran from 1961 to 1966. The two actors were the perfect comedy duo - matching wits, singing, dancing and charm. The show was a bridge between the simpler vaudeville style of early TV, and the sophisticated, more nuanced style of TV to follow.

Mary Tyler Moore was born in Flatbush, Brooklyn, New York, and her family moved to California when she was eight. Her personal life was in stark contrast to her TV persona. Both her parents were alcoholic and abusive and she moved out to live with an aunt. Her sister died of drug overdose, her brother of cancer. Her only child, born when Moore was only 20, died in a gun handling accident, age 24. Moore herself had medical issues: diabetes, a drinking problem; in 2011 she underwent brain surgery.

Moore broke into show business in commercials, at 17, dancing as an elf for Hotpoint appliances. Bit parts in TV shows followed, first dancing, then acting. They attracted the attention of Dick Van Dyke, who cast her in his show, and Moore was on her way. During the show's run, Moore divorced her first husband and married Grant Tinker, a studio executive. They formed MTM Enterprises, and when Van Dyke decided to cancel his popular series, the couple created their Mary Tyler Moore Show, about a recently divorced woman- just as Moore has been- living on her own, and working for a living. The  couple pitched  to CBS and the network liked it. But, typically for the times, they vetoed the idea of featuring a divorced woman - the compromise was to say that Mary is single because she broke up with her fiancé. The show was launched, and went on to make TV history. 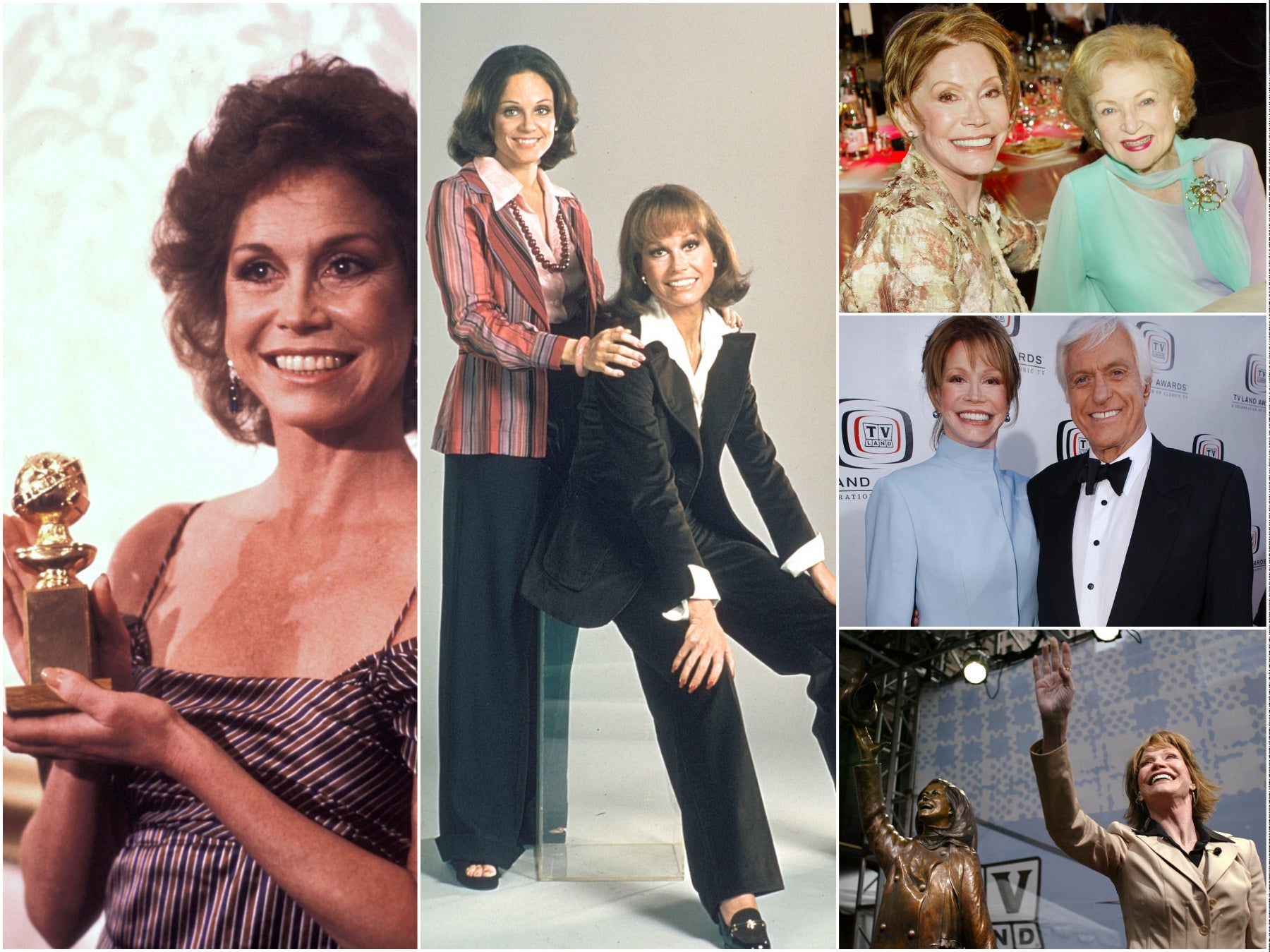 The life of a pioneer: (from left) with her Golden Globe for Best Actess-Drama in 1981; with her Mary Tyler Moore co-star Valerie Harper in the 1970s; (from top) with another MTMS veteran, Betty White, in 2004; with Dick Van Dyke in 2003; in May of 2002, waving to the crowd next to the statue honoring her In Minneapolis, Mn. - the statue depicts Moore tossing her hat from the opening credits of the The Mary Tyler Moore Show.

The cast was a TV all-star: Ed Asner, the gruff but lovable boss of the provincial TV station where Mary was a producer; Gavin McLeod as the boring news writer; Ted Knight, the vain anchorman. The female characters included Valerie Harper, as Rhoda, Mary's neighbor; Cloris Leachman, Mary's landlady; and Betty White as a show host. All went on to win Golden Globe nominations and awards. The writers and producers of the show created other iconic TV series- The Simpsons, Taxi, and Cheers. The series spun off other successful TV shows: Rhoda, Phyllis and Lou Grant. MTM Enterprises also produced such TV hits as Newhart, WKRP in Cincinnati, Hill Street Blues, St. Elsewhere and Remington Steele .Moore's influence on American TV was indeed profound, long lasting and far reaching.

When her show ended, Moore turned to dramatic acting. She won her third Golden Globe in 1981, as Best Actress in a Motion Picture-Drama, for her role in the award-winning film Ordinary People , by first time director Robert Redford (six time Golden Globe winner, including the Cecil B. deMille award)..

Moore kept working: on stage (she won a Tony), in movies and TV. She told a reporter in 1995: “I’ve come to the point in my life where I don’t have to work, but I work because I enjoy it. I only enjoy doing things that frighten me a little bit. And I am an actress.... as well as a personality. And I’ve got to keep the actress in me happy.” Moore also spent time on her favorite causes:  Animal welfare, diabetes research and arts scholarships.

Mary Tyler Moore, dead at 80, is best remembered in the words of her show's theme song: “Who can turn the world on with her smile?/ Who can take a nothing day, and suddenly make it all seem worthwhile?”

She made it, after all. 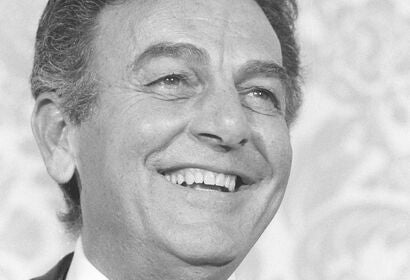