A Blast From the Past: TCM Classic Film Festival Rocks Hollywood

by Elisa Leonelli April 10, 2017
Share on FacebookShare on TwitterShare on PinterestCopy URL 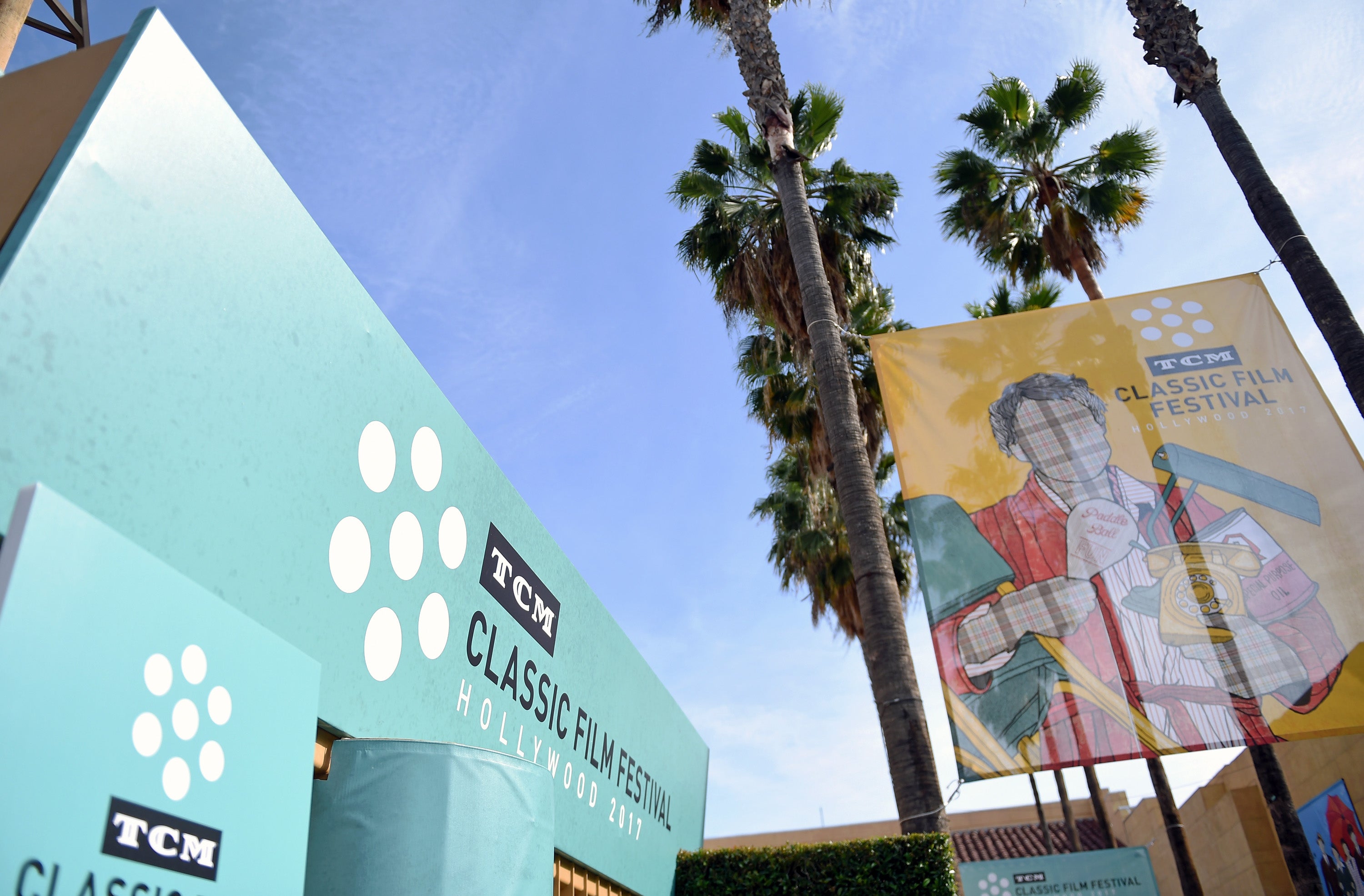 The TCM Classic Film Festival, launched in 2010, was held for the eighth year in Hollywood, April 6 to 9, 2017. Crowds of movie lovers of all ages lined up to watch their favorites films on the big screen at the Chinese, Egyptian and Arclight theaters and they gathered for social events at the Hollywood Roosevelt Hotel.

Live appearances by movie stars and film directors peppered the program and delighted the fans. Sydney Poitier, Lee Grant and director Norman Jewison attended the opening night 50th anniversary screening of In the Heat of the Night and Mel Brooks had everyone laughing when introducing the 40th anniversary screening of High Anxiety.  The theme of this year’s festival was “Make ‘Em Laugh: Comedy in the Movies.”

Michael Douglas sat for a live interview with TCM host Ben Mankiewicz at the Ricardo Montalbán theatre on Vine street (opened January 19, 1927 as a venue for stage plays, converted to a movie theatre in 1931). He said about the festival: “I imagine the audience is growing, because I find that there’s a bunch of kids who like old films, so it gives you continuity from one generation to the other.” Douglas also introduced a screening of The China Syndrome (1979) by James Bridges where he costarred with Jane Fonda and Jack Lemmon.

Father and son Carl Reiner and Rob Reiner were honored with a Hand and Footprint ceremony in front of the historic Chinese Theater, opened May 18, 1927 with a premiere of Cecil B. deMille’s The King of Kings. Other screenings included The Graduate by Mike Nichols starring Dustin Hoffman and Anne Bancroft, Bonnie and Clyde by Arthur Penn with Warren Beatty and Faye Dunaway, Barefoot in the Park from the play by Neil Simon with Robert Redford and Jane Fonda. 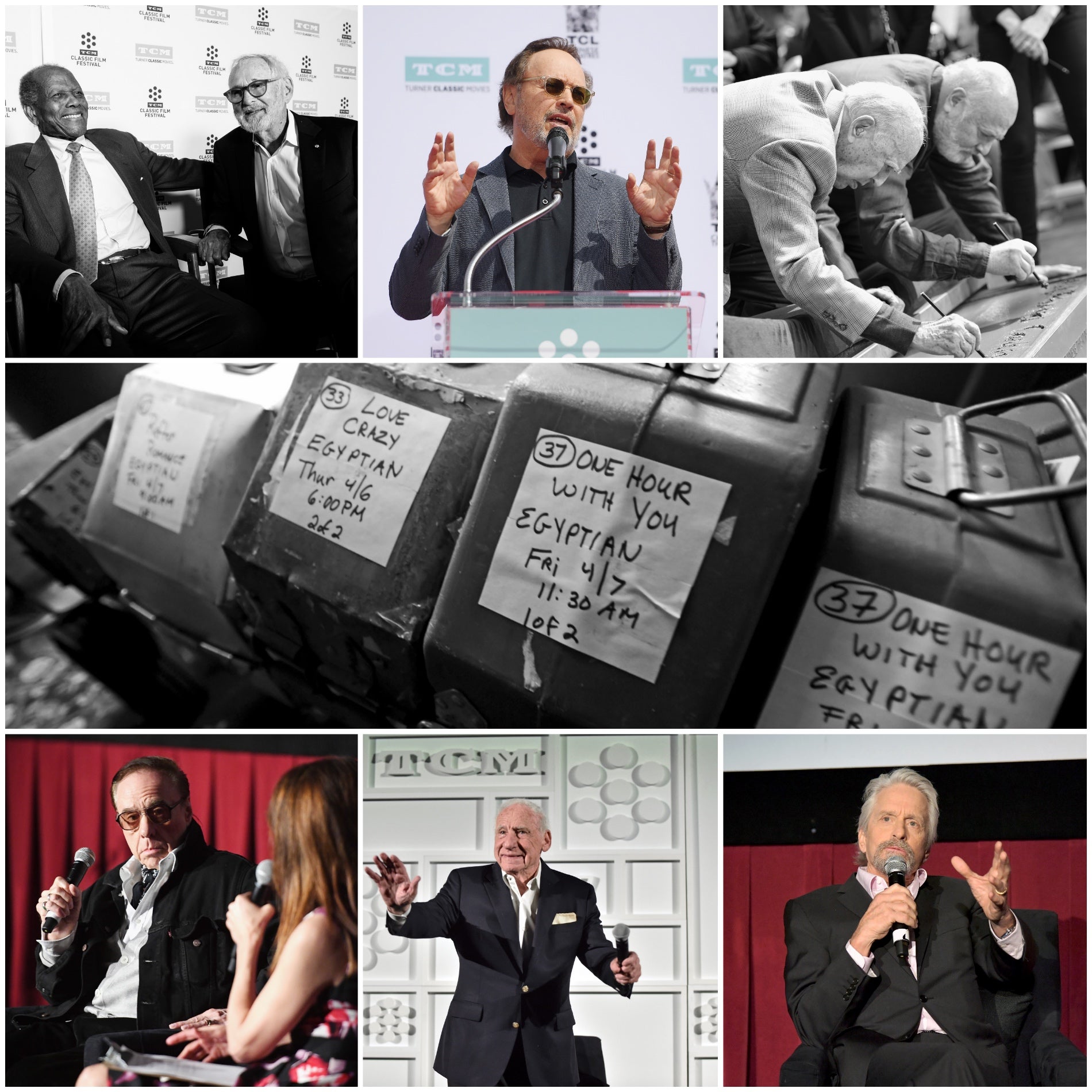 Classic moments at the TCM Film Festival 2017 (from top, left): Sidney Poitier and director Norman Jewison at the screening/q&a for In the Heat of the Night; Billy Crystal opens the palm print ceremony for Carl and Rob Reiner at the Chinese Theater; Carl and Rob Reiner do the deed; reel crazy - celluloid reigns at the TCM Festival; director Peter Bogdanovitch fields questions; Mel Brooks reacts to the audience's enthusiasm; Michael Douglas talks about The China Syndrome.

A series of films honored actors and filmmakers who passed away in 2016: Gene Wilder with Willy Wonka and the Chocolate Factory (1971), Debbie Reynolds with Singin’ in the Rain (1952) co-starring Gene Kelly as well as her doughter, Carrie Fisher, with Postcards from the Edge (1990) directed by Mike Nichols, starring Meryl Streep and Shirley MacLaine. Fisher wrote the screenplay for the film from her 1987 semi-autobiographical novel.

For the first time the TCM festival featured screenings of rare nitrate prints thanks to the new specially retrofitted  projection booth at the Egyptian theater, renovated this year thanks to a $350,000 grant from the Hollywood Foreign Press Association in partnership with Martin Scorsese’s Film Foundation.  Scorsese himself introduced a screening of Alfred Hitchock’s The Man Who Knew Too Much (1934) starring Peter Lorre (in black & white). He said: “Retrofitting a theater to make it capable and safe to project nitrate is an enormous undertaking, so these films are rarely seen.” Cellulose nitrate was the highly flammable film stock used until 1952, when it was replaced by the more stable acetate. That leaves an enormous body of films in precarious condition and rarely seen; as part of its mission the HFPA is committed to preserving and showcasing this important cinematic heritage. The other three film presented on nitrate prints were in Black & White Laura (1944) directed by Otto Preminger starring Gene Tierny and Dan Andrews, and in color Black Narcissus (1947) with Deborah Kerr and Jean Simmons and Lady in the Dark (1944) directed by Mitchell Leisen from the 1941 Broadway musical by Kurt Weil and Ira Gershwin starring Ginger Rogers and Ray Milland.

This edition of the TCM festival was dedicated to Robert Osborne, TCM host from its inception in 1994, who passed away on March 6, 2017 at age 84.  A journalist, he wrote his “Rambling Reporter” column for the Hollywood Reporter. 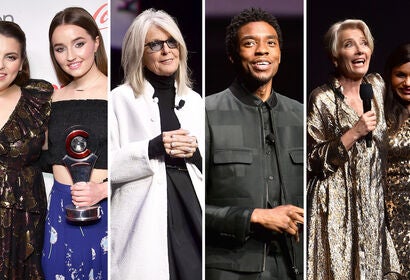 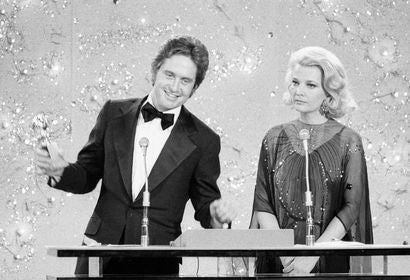